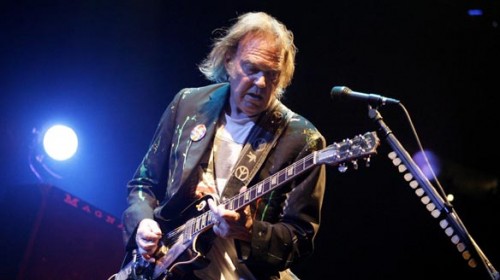 Perhaps, then, it’s not surprising that Young has not covered many songs himself. He started out, as all musicians do, as a cover artist. When he sang The Beatles’ “She Loves You” onstage in a church basement in Winnipeg, an audience member famously told him to “stick to instrumentals.” Since that time, however, he’s concentrated on developing as a songwriter (perhaps unwittingly participating in the marginalization of the song interpreter on the way). For this edition of In The Spotlight, we look at a few of the covers Young has attempted, either on album or in concert.

With “Oh Lonesome Me,” nestled in the middle of 1970’s After The Goldrush, Young delivers the perfect cover. A markedly different arrangement from the original, he communicates the essence of the song much better than the jaunty original. You can hear the heartache through the whole track, from the opening cry of the harmonica and funereal pace, through to the anguished howl on the fade-out.
MP3: Neil Young – Oh Lonesome Me (Don Gibson cover)

After releasing On The Beach in 1974, Young played a grand total of one show to support the album (he also did a cash grab tour with Crosby, Stills, Nash and Young later that year). An odd, acoustic set at the Bottom Line Club in New York City, the show featured this rare cover of “Greensleeves,” a traditional English folk song. Young uses the track to demonstrate his love for the guitar playing of Bert Jansch, British acoustic virtuoso.
MP3: Neil Young – Greensleeves (Traditional cover)

Admittedly, Young hit the musical ditch hard in the ‘80s. Asked to produce a “rock’n’roll” album, Neil presented his label with the execrable Everybody’s Rockin’, full of weak, pseudo-‘50s material. Locked in a battle of wills with the label who hoped for another After The Goldrush, his next album was pure country and opened with this cover of Gogi Grant’s schmaltzy “The Wayward Wind.”
MP3: Neil Young – The Wayward Wind (Gogi Grant cover)

By the end of the ‘80s, Young found his musical legs again, producing Freedom, his strongest album in 10 years. The album featured a mix of light acoustic and heavy electric numbers, including a cover of the Drifters’ classic “On Broadway.” The version below is taken from a live performance with his band The Restless six months before the album came out.
MP3: Neil Young – On Broadway (The Drifters cover)

In 1992, Young faced an unruly crowd at Bob Dylan’s 30th Anniversary Concert. They had just booed Sinead O’Conner off the stage (a few days earlier she had ripped up a picture of the Pope on Saturday Night Live). He met the challenge with this fiery version of “All Along The Watchtower.”
MP3: Neil Young – All Along the Watchtower (Bob Dylan cover)

Young enjoyed playing with backing band Booker T and the MGs at the Dylan show so much that he took them out on tour the following year. Here, he mines their experiences as the Stax Records house band in a performance of Otis Redding’s “(Sittin’ On) The Dock Of The Bay.”
MP3: Neil Young – (Sittin’ On) The Dock of the Bay (Otis Redding cover)

4 Responses to “In The Spotlight: Neil Young”