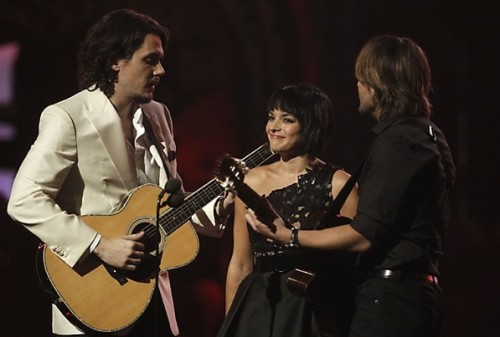 The second of our Grammy cover coverage (after Mick Jagger covering Solomon Burke) comes as a heartwarming tribute to the recently deceased White Stripes. Well, that’s how we like to think of it. Sure, “Jolene” is a Dolly Parton song – and not exactly an obscure one – but the Stripes thoroughly owned it. The occasion was Dolly Parton’s Lifetime Achievement Award, but we’re sure at least some people in the audience made the connection to Jack and Meg. Hopefully the performers did too.

Said performers – Norah Jones, Keith Urban, and Johnny Depp-lookalike John Mayer – played a surprisingly funky “Jolene.” Though hardly as news-making as many other performances, the trio delivered an unexpected highlight with plenty of slap-guitar. Only one quibble: too short.

Check out more at Grammy.com.