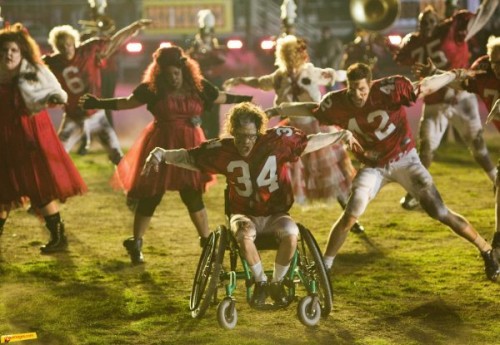 Anyway. That most popular, prolific cover-creating machine in American culture known as Glee has returned with new episodes following a two month break. For their half-season kickoff, they scored the coveted post-Super Bowl timeslot, which has traditionally led already-popular television programs to incredibly high ratings. It’d probably be an exaggeration to suggest that the eyes of the world were on Glee last night, but it’s fair to say that a whole lot of people were watching.

So did Glee deliver? The much-hyped episode “The Sue Sylvester Shuffle” found glee club director Schuester and football coach Beiste attempting to unify their warring cliques by forcing them together as musical partners. Of course, a bunch of jocks don’t take too kindly to being made to sing and dance, especially when they see how far it drops them down the social ladder, but they may not have a choice if they want to win their regional championship.

If you’ve read my Glee columns before you know that I’m a major proponent of variety in the show’s song selections. The first half of season two didn’t always do such a great job with mixing up song selections, although one of the last episodes that aired showed a lot of promise, as it featured Glee‘s first real indie song to date, Florence and the Machine‘s “The Dog Days are Over.” One can’t tell if the song selections from this episode accurately predict the rest of the season, of course, but the mix of music on display here does a lot to reignite my faith in the show. Of the five songs featured, no two share a genre. This episode lays out classic rock, classic pop, modern(ish) pop, a second indie song and another first for Glee: popular country. Although the “something for everyone” approach can sometimes be annoying, I think it befits a show like Glee, which, like most good cover bands, benefits significantly from diverse song selection.

1. Need You Now (Lady Antebellum cover)
Lady Antebellum’s found major success in the worlds of both popular country and rock. This 2010 lead single and title track to their second album got them tons of play everywhere, and currently stands as the 19th most-downloaded song in Internet history. Here, Rachel (Lea Michele) and Puck (Mark Salling) weave together impressive harmonies that do the original track justice, but Lea lacks the twang quite present in Antebellum vocalist Hillary Scott, which probably makes the song a little more palatable for a wider audience.
Glee version
BONUS COVER: Darius Rucker & Adele

3. She’s Not There (The Zombies cover)
Glee makes a rare foray into truly classic rock to bring us this 1964 gem, the debut single from influential British band the Zombies. It’s performed here, somewhat unwillingly, by the football team, in full-on zombie make-up to boot. While their rendition doesn’t really shed any new light on the track, it’s nice to see Glee tap into music history.
Glee version
BONUS COVER: Santana

4. Thriller (Michael Jackson cover) / Heads Will Roll (Yeah Yeah Yeahs cover)
For about a week prior to its airing, some websites had been circulating the leaked mash-up that serves as the centerpiece to “Sue Sylvester Shuffle,” to mixed critical reception. Now, I have a history of liking Glee‘s mash-ups. They strike me as a chance for the show to really get creative with its music. I found this marriage of Jackson’s seminal 1984 dance single with a 2009 horror tribute from the Yeah Yeah Yeah’s to be no exception. The songs just work together lyrically and thematically, especially if you consider their music videos. Beyond that, the Glee kids throw a lot of energy into this performance, and in my opinion it pays off. The superb and underutilized Artie (Kevin McHale) provides lead vocals on the “Thriller” portions, while the ladies of the choir handle the Yeah Yeah Yeahs parts. The consideration show producers here gave to song selection and arrangement kindles a lot of hope for the rest of Glee‘s second season.
BONUS COVER (Thriller): Imogen Heap

Tune in Wednesday  for another set of all-new Glee covers.