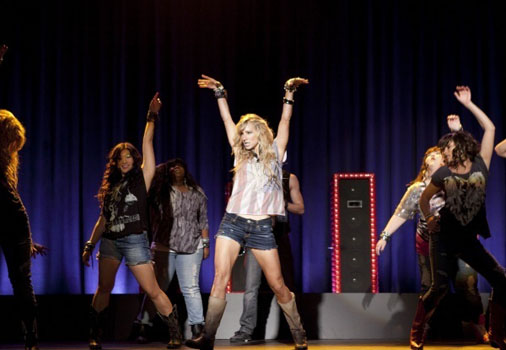 Last night’s Glee would fall into the category of “a very special episode,” except that the show often takes on issues typically relegated to after-school specials. Still, as the title promises, “Blame it on the Alcohol” features the glee club from McKinley High dealing with that particular temptation in exaggerated ways. Responding to increased incidents of public drunkenness from students, Principal Figgins assigns the club to perform an anti-drinking number during a school assembly. Meanwhile, Rachel’s parents leave town and, looking to “live a little,” she throws one of those wild teenage parties that usually only happens in TV shows (and where most of the actors are well past their teenage years).

But of course I’m just being snarky. “Blame it on the Alcohol” actually had some pretty interesting stuff going on, especially for a television show that tends to claim Middle America as its audience. But, you know, we’re not here to talk about drinking in school or sexual confusion. It’s tunes we’re after, and musically “Alcohol” comes up a little flat. Partially that’s because it contains only four performances, at least one of which is comically cut short to advance the plot. Additionally, I found most of last night’s songs pretty lifeless. We’ve already covered how pointless it is to hate on Glee songs because of their overproduction, but behind all those studio tricks the actors have to convey a sense of fun (or, you know, glee) in their performances, and I thought three of the four songs lacked in that area.

Don’t You Want Me (Human League cover)
The one song that really shone through is a cover of this über-cheesy ’80s dance-pop hit. Glee‘s arrangement brings synthesizers to the foreground even more than Human League’s, which makes the track actually sound like something drunk teenagers might get silly to nowadays. The real joy here comes from Glee‘s added harmonies, which turn the song into more of a true duet and give Rachel (Lea Michele) and Blaine (Darren Criss) a rare chance to bounce their considerable vocal talent off each other.
BONUS: The Smashing Pumpkins covered this? Really?! Yes, really.

Blame It (On the Alcohol) (Jamie Foxx ft. T-Pain cover)
Though I like the idea that Glee episodes have title tracks, I’m less sold on this performance of the 2009 hit for actor-turned-rapper Jamie Foxx. I do dig that Artie (Kevin McHale) got lead vocal duties again; he’s been holding down a lot of soulful pop songs lately (note his back-to-back Michael Jackson performances) and, as one of the more talented vocalists on the cast, that’s always welcome.
Glee version
BONUS: Post-hardcore band Of Mice and Men transform this song for Punk Goes Pop.

One Bourbon, One Scotch, One Beer (Amos Milburn cover)
Let’s unravel the history of this song, shall we? R&B songwriter Rudy Toombs scored a hit with this blues jam (originally titled “One Scotch, One Bourbon, One Beer”) in 1953, as performed by Amos Milburn. The legendary John Lee Hooker repopularized the song in the ’60s. Gritty blues revivalist George Thorogood brought his approach to the song in 1977, though he merged it with another Hooker tune, “House Rent Boogie,” to add to the song’s narrative. It’s the Thorogood version Glee tributes here, thus making this some kind of crazy double-cover squared. The song’s performance marks the singing debut of Coach Beiste (professional bodybuilder Dot-Marie Jones), and also features co-lead vocals from Mr. Schuester (Matthew Morrison). It’s not really a great cover, but it’s worth watching.
BONUS: Let’s hear how John Lee Hooker did it in 1966.

Tik Tok (Ke$ha cover)
In the show, the glee club for some reason opts to perform this party anthem from “Key-Dollar Sign-Ha” at their anti-drinking assembly, but because they take a few shots before the performance, it’s interrupted by projectile vomit. Rest assured, though, the version you can buy on iTunes and CD remains complete. Brittany (Heather Morris) takes lead vocals here. While Heather provides the show with a number of assets (most notably her comic timing), vocal strength isn’t really among them. The result is a performance which sounds more heavily-autotuned than usual. I realize that stays true to the original song, but that doesn’t make it any more pleasant to listen to.
Glee version
BONUS: In case you’ve missed it so far, the awesome Simpsons opening set to this modern masterpiece.

Coming up next: The return of Gwyneth Paltrow, and the music of Prince makes its Glee debut. Apparently, you don’t have to be rich to be Will’s girl.

Tune in the Wednesday after next for another set of all-new Glee covers.

One Response to “Glee Covers Roundup 2/22/11: Blame It On The Alcohol”