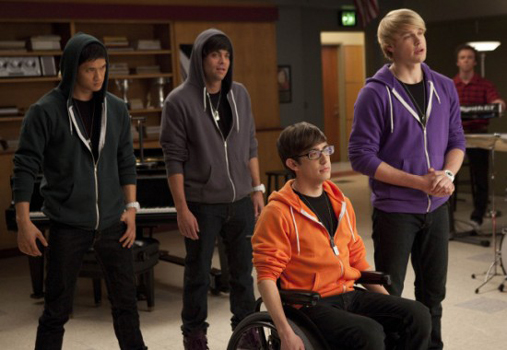 Call me Esperanza Spalding, because I’m about to upset some Justin Bieber fans.

Earlier this season, when some press outlets reported rumors that Glee would spend an entire episode paying tribute to Justin Bieber, my heart sank a little. Fortunately, those rumors were blown out of proportion; instead of a whole episode, Glee gave over only a couple songs to the teenage sensation. Still, those 20 minutes or so when Bieber provided the central focus for the show’s plot created a pretty horrific viewing experience.

The story: Sam (Chord Overstreet) decides that, to win the heart of Quinn (Dianna Agron), he must form a one-man Justin Bieber tribute band. This happens to dovetail with the glee club’s assignment to perform anthemic songs — at least, by the show’s logic. When some of the other guys in the club see how women react to the Bieb, Sam’s “Justin Bieber Experience” becomes a quartet.

Now, I realize that, as a grown man, I don’t represent the target audience for Glee‘s high school dramedy vibe. I certainly don’t represent the key Justin Bieber demographic. In fact, I feel so far removed from Bieber that I can’t accurately judge if any real talent lurks behind his trademark haircut and smile. Bieber’s fame may mark the first time that I see a mega-popular artist and just don’t get it. So while I’m not out to rain on anybody’s parade, I can safely say I’m not a fan of the kid. Every once in awhile I refer to the idea that Glee basically functions as a cover band (something which this episode directly alludes to). Well, if I went and saw a cover band and they played two Justin Bieber songs, I’d probably walk out.

After the 20 minutes in which Glee completely lost me, I found that things got back on track a little bit. The show rarely spotlights any new-wave songs, so its inclusion of a classic Waitresses tune was welcome. My Chemical Romance also joined the Glee fold tonight, though I imagine some viewers didn’t exactly welcome them happily. Those songs were rounded out by another Broadway tune (the show’s first from Rent) and a sweet folk classic. Those later songs again provided an enjoyable mix of music. But as for the first few tracks: baby, baby, baby…no.

Take Me or Leave Me (from Rent)
Glee hasn’t touched on songs from the stage in a few episodes, and incorporating one from the ever-popular Rent seems like a slick way to do so without making a clear digression from pop and rock songs (although viewers might be forgiven for mistaking “Take Me or Leave Me” as an early ’80s Billy Joel track). The show presents this song as a “Diva-Off” between Rachel (Lea Michele) and Mercedes (Amber Riley). Both of these ladies perform excellently, but personally I’d call Michele the winner.
BONUS: Nicole Scherzinger (Pussycat Dolls) cover

Baby (Justin Bieber cover)
Has anyone not heard this song by now? Do I even need to go into it? “Baby” provided then-15 year old Justin Bieber with his breakout hit in 2010 and pop music has never recovered. Kids today! (musical note: check out how Glee drops the song’s key a few steps so Overstreet can get a hold on it. Looks like someone‘s gone through puberty!)
Glee version
BONUS: Not a cover, exactly, but comedian Aziz Ansari shows us the truth behind this song.

Somebody to Love (Justin Bieber cover)
If you haven’t caught Bieber fever (consider yourself lucky) this song may not have been as familiar to you. It was released as the follow-up single to “Baby” in 2010 and was originally recorded as a demo by Usher before its songwriters passed it on down. For this song, Sam’s joined by Artie (Kevin McHale), Mike (Harry Shum Jr.) and Puck (Mark Salling), who’ve wisely deduced that a Justin Bieber tribute band will make the ladies go crazy. Ladies aren’t the only ones…
Glee version
BONUS: Eric Stanley’s violin cover

I Know What Boys Like (The Waitresses cover)
One of the more interesting plot developments in the last few episodes of Glee has been the budding almost-relationship between Puck and newcomer Lauren (Ashley Fink). In last week’s post we featured Puck’s love song to Lauren, “Fat Bottomed Girls,” and this week’s Waitresses cover serves as Lauren’s response. I like when Glee lets new cast members get the spotlight, and I like when they do quirkier songs like this. The video of the performance also has a great sight gag: Lauren’s coached to picture everyone in their underwear, and there’re some nice jokes about what each character wears under their usual clothes.
BONUS (kind of): The House Bunny wants you to see how this song is done.

This Little Light of Mine (Harry Dixon Loes cover)
Unfortunately, one of the night’s best performances won’t be released on CD or iTunes. It comes in the form of a ukulele-backed singalong in the children’s ward at a hospital, which we learn Coach Shue (Matthew Morrison) visits monthly. Yes, it’s schmaltzy and clearly designed to pull at our heartstrings. It’s also nice, though, to see Glee put on a number with little post-production. There’s no autotuning or compression in play here — it’s just kids singing. The best episodes of Glee remind us of the transformative power of music, and sometimes sitting in a circle singing with your friends achieves that better than any elaborate production. Videos of this scene haven’t been uploaded, so you’ll have to do with the audio.
Glee version
BONUS: Sam Cooke cover

SING (My Chemical Romance cover)
Like Justin Bieber, My Chemical Romance has its share of rabid devotees and irrational haters. Unlike Justin Bieber, their music doesn’t really lend itself to a show like Glee, at least not at first glance. However, they do tend to display a flair for the dramatic that echoes operatic bands like Queen and Pink Floyd, especially on more recent releases. “SING” comes from their 2010 album Danger Days: The True Lives of the Fabulous Killjoys, and provided the album with its second single. The entire glee club, joined by Sue Sylvester (Jane Lynch), sings it as the show’s closing number.
Glee version
BONUS: MCR’s crazy sci-fi video for the song, which channels Laser Cats and for some reason features renowned comic book scribe Grant Morrison.

Coming up next: Hints that Glee‘s doing an original song. Am I out of a job?? Also the kids get drunk. I don’t know what I expect but I hope it looks like this.