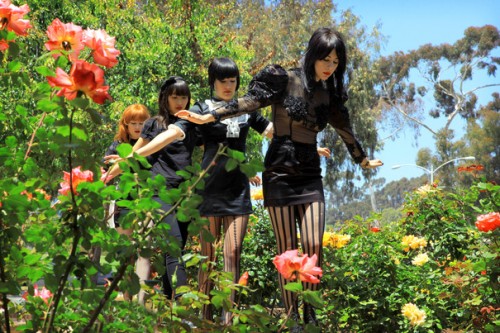 The music world rarely lacks for Smiths covers, but they seem to be appearing with increased frequency these days. Tuesday we posted a new cover of “Girlfriend in a Coma” and before that we posted new covers of…every single song in the Smiths cannon. So if you’re starting to get a little Morrissey-ed out, we understand. We do hope you’ll dive in one more time though. You’ll be glad you did.

True, the song is “There Is a Light That Never Goes Out,” a song you’ve heard covered a million times (or at least five). Calirfornia quartet Dum Dum Girls inject a refreshing new ingredient into the mix though: energy. Like a less-hazy Best Coast, Dum Dum Girls give beachy surf-rock swing, complete with Ventures-style guitar solos. The track comes from the band’s upcoming He Gets Me High EP. (via Slicing Up Eyeballs)

Check out more Dum Dum Girls at their website or MySpace.