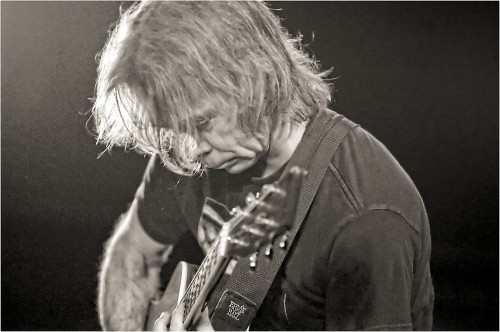 Many people who know Tim Reynolds came to him via one man: Dave Matthews. The two toured together as an acoustic duo for years. He toured with Dave Matthews & Friends and finally became an official Dave Matthews Band member in 2008. Saying Reynolds would be nothing without Matthews gives him too little credit; prowess this impressive couldn’t go unheard forever. Without Dave though, Reynolds’ career trajectory would look very different.

Before you dismiss him as some leech riding Matthews’ coattails though, you need to hear his solo stuff. Whether you think Matthews is a modern prophet or self-important fratboy is irrelevant. Even the most ardent Dave-bashers can enjoy Reynolds’ guitar mastery. No mindless jamming here; when Reynolds sets out on an instrumental journey, he does so with purpose.

Below, we present five covers from Reynolds’ solo shows. All except “Cold Sweat” are entirely instrumental. Reynolds rolls through a flamenco-inspired “In Your Eyes” and a twangy twelve-string “Here Comes to Sun.” He layers on some absurd crazy effects pedals for “I’m Your Captain (Closer to Home).” With “Ohio,” he combines both approaches. The bluesy instrumental seems pleasant enough until, with the flip of a switch, Reynolds sounds like he’s broadcasting transmissions from Saturn.

Download all five below, along with a special bonus cover featuring a certain longtime friend.

Check out more Tim Reynolds at his website or MySpace.