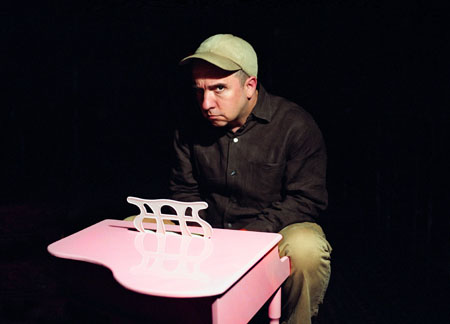 There’s no denying that it takes a versatile artist to write songs about love in ways that are both consistently inventive and precise. It takes an artist like Stephin Merritt to create songs that not only are beautiful individual pieces, but also paint a broader picture of hope and despair, murder and joy, beauty and hideousness. Merritt somehow manages to create a comprehensive picture of love with his songs, all while bringing his distinctive indie-pop sensibility to it. This book of love is never boring. He turns forty-five today.

Merritt is best known for his work with the Magnetic Fields – their exhaustive, three-disc 69 Love Songs has been compared in scope to David Foster Wallace’s Infinite Jest – but you can also find him with the Future Bible Heroes, the 6ths, and the Gothic Archies. He even helmed the soundtrack to the musical theatre adaptation of Neil Gaiman’s Coraline. The imagination inherent to his work provides for astonishing ease of interpretation. Merritt imbues his person so deeply in every track that his work invites other artists to give equally of themselves.

• The Shins attest to the influence of Merritt’s work with a cover of the early track “Strange Powers” (an acclaimed documentary of the same title came out this year).
• Audrey (Maybe) attacks “100,000 Fireflies” with the kind of vocal layering that Merritt brought to “Abigail, Belle of Kilronan.”
• Tracey Thorn and Jens Lekman create an oddly serene “Yeah! Oh, Yeah!” that captures the uniquely bored spirit of what may be the strangest murder ballad duet of all time.
• Bodies of Water deliver a cover of “I Don’t Believe in the Sun” replete with church/ballpark organs (take your pick, depending on the mood).
• James Eric – who was among our first contributors to Cover Commissions – gives “(Crazy For You But) Not That Crazy” a fitting brand of jumpy, horn-backed vitality.

10 Responses to “They Say It’s Your Birthday: Stephin Merritt”