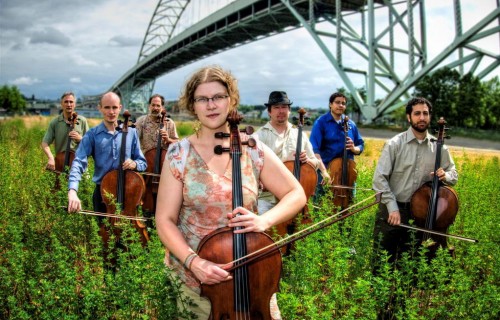 Hip-hop and cello may seem like strange bedfellows to most, but not to the Portland Cello Project. The group, who describe themselves as an “amorphous collective,” formed in 2007 and record for Kill Rock Stars – home to The Decemberists, Gossip and Bikini Kill. They perform a mixture of originals and genre-crossing orchestral covers. And it doesn’t get much more genre-crossing than this.

Their recent arrangement of Kanye West’s “All of the Lights” demonstrates their talents in orchestration and song discovery. After listening to their version, revisit the original. PCP (as fans call them) remind you of the song’s already-dense orchestration, a symphony of voices turned into an actual symphony. Very different from the Telephoned cover we heard last week. Watch the video below. (via Vulture)

Portland Cello Project – All of the Lights (Kanye West cover)

Check out more Portland Cello Project on their website.