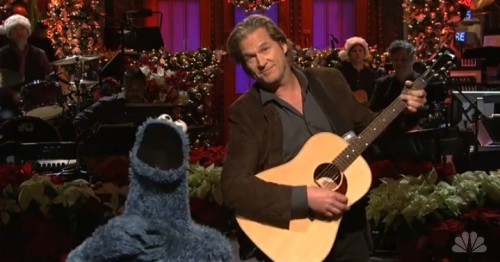 What’s wrong with T.V. these days? Is it lack of heart? Reality shows pandering to the lowest common denominator? The system where the squeakiest wheel gets the grease (or, as it were, viewers)? Well, Saturday night offered a new hypothesis. Believe it or not, in the 21st century, there are still shows that don’t feature a Jeff Bridges and Cookie Monster duet.

After watching their strangely heartwarming version of “Silver Bells” from Saturday Night Live, you’ll wonder how any show survives without this odd couple. After Sesame Street posted Cookie Monster’s fake SNL audition video a few weeks back, the response was inevitable. Bridges hams it up and, in the spirit of the season, they even avoid Katy Perry jokes.

Watch the full episode below. Bridges and Cookie Monster’s duet comes at 6:30.