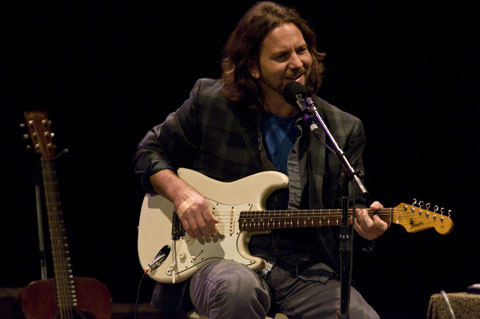 Before Pearl Jam, Eddie took part in the short-lived Temple of the Dog, a collaboration between members of his future band and Soundgarden. Here, Ontario performer David Ellul gives their only hit, “Hunger Strike,” the solo treatment.

Here at Cover Me we love Allison Crowe. Check out her awesome piano-vocal cover of the haunting “Release,” also originally featured on Ten.

Wait, what? As it turns out, mega-popular country act Sugarland released a whole album of live covers last year, of which “Better Man” was a part. Their arrangement, which includes mandolin and accordion, does Eddie proud.

Finally, we end with a sampling from Eddie’s solo career, as Tacoma, WA singer/songwriter Bo Cappabianca (who releases material under the name 17 Queens) takes a whack at “Hard Sun,” the standout tune from Vedder’s Into the Wild soundtrack.

Check out more from Eddie and the gang on the Pearl Jam website!

4 Responses to “They Say It’s Your Birthday: Eddie Vedder”