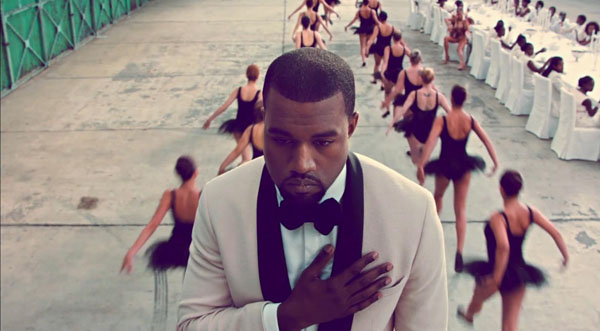 As you may have heard, Kanye West has a new album. As you may also have heard, it has been well-received (to put it mildly). The album that’s topped more best-of lists than any other, My Beautiful Dark Twisted Fantasy boasts such oddities as Bon Iver singing backing vocals, a Chris Rock interlude, and a 35-minute promotional video. Said video soundtracks his song “Runaway,” the album’s second single. Into the convoluted narrative West crams twisty ballet, a naked phoenix, and a Michael Jackson parade float. This high-concept oddity helped remind folks that, despite all his boorish drama, West possesses ambition few can rival.

Perhaps as a result of the video, “Runaway” has become the most-covered song off the album. It’s Kanye’s “We Used to Wait,” if you will. Though no big-name covers have cropped up (yet), the under-the-radar renditions have been coming fast. Below, we give you the five best in no particular order. Click the titles to grab the MP3s.

1. Page Three Girls – Runaway (Kanye West cover)
Layered harmonies and the whistle intro make this one a lullaby for the baby.

Turning this into a duet brings out the dark, twisted romance buried deep within this one. Really, this song is just Kanye’s incredibly roundabout way of saying, “I’m sorry.”

Against all odds, this disco thumper incorporates the immortal “Imma let you finish” speech without inducing eye rolls.

Taken from a live video, the sound quality on this isn’t ideal, but the performance represents the hardest rocking version yet.

Know any other good “Runaway” covers? Post ‘em in the comments!

8 Responses to “Presenting: The Five Best Covers of Kanye West’s “Runaway” (So Far)”