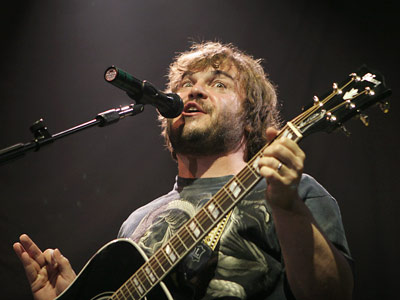 An unlikely pair has chosen to enter the holiday music fray. Jason Segel – who starred in I Love You, Man – and Jack Black – who needs no introduction – reenact the Bing Crosby and David Bowie duet “Peace on Earth/Little Drummer Boy.” Bing and Bowie recorded the medley in 1977 for Bing’s last Christmas special; he suffered a fatal heart attack a few weeks later after a round of golf that was apparently more invigorating than most. Black and Segel may not be the first names that come to mind when you think about the holidays, but then Bowie is hardly jolly old St. Nick.

The boys give the medley the full-on “November Rain” treatment, with bombastic guitar, drums and orchestra. While their animated avatars goof around in the video (thanks to College Humor), the performance is surprisingly respectful. The arena rock arrangement actually complements the song instead of overpowering it.

They recorded the song in support of Blue Star Families, an organization that supports military families. So enjoy the video below and download the single in support of a good cause. Let’s hope that Jack and Jason avoid the golf course for the next little while!

Support the cause and download the single from iTunes.