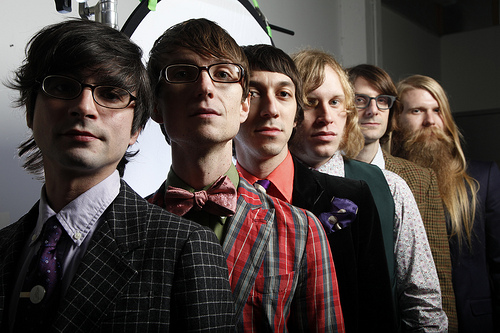 Brooklyn six-piece Robbers on High Street have joined in on the Christmas festivities this year with their cover of The Sisterhood’s “The Rocking Disco Santa Claus.” True to its name, the original, though only released on a Christmas compilation album in 2003, sounds like it might as well have been lifted from the juke box of a disco roller skating rink in 1978. And apart from the fact that the Robbers are fronted by Ben Troken and the Sisterhood is led by a female vocalist, the only real difference between the two tracks is the addition of the Robbers’ signature brass section – which is to say, it sounds even more like it’s straight out of the disco era.

No strangers to covers, Robbers on High Street participated in the second installment in Engine Room Recording’s Guilt By Association series back in 2008 with a cover of New Edition’s “Cool it Now.” Check out their take on “The Rocking Disco Santa Claus” below.

Check out more from Robbers on High Street at their website or MySpace.