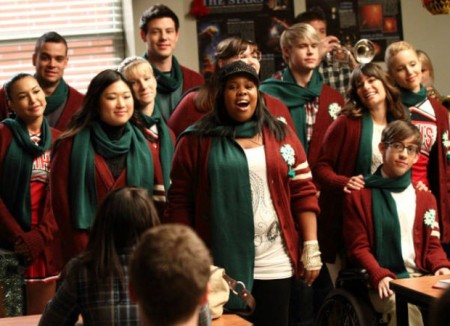 In “A Very Glee Christmas,” McKinley High’s glee club kids try to get into the holiday spirit by helping keep Brittany’s belief in Santa Claus alive, but grinchy coach Sue Sylvester has her own plans to wreck the holiday. Meanwhile, Rachel desperately tries to reunite with Finn, and Will continues to sit on a ton of resentment for John Stamos.

Here we are at the halfway point of Glee‘s second season. I’ve got a lot to say about these last 10 episodes, but there’s a half-season roundup post coming soon to take care of that. As for the Christmas episode: it was handled pretty much like one would expect a Glee Christmas show to be, complete with dashes of overblown drama, scoops of sentimentality and a tiny little nugget of genuine emotion at its core. That description applies to both the episode’s plot and its music.

For its song selection, “A Very Glee Christmas” interestingly decides to eschew holiday classics in favor of somewhat more modern songs. Here Glee lifts tracks from a ’60s musical, a ’40s songwriter, two late 20th century pop groups and a couple of televised classics (actually, Glee borrows not only two songs from How the Grinch Stole Christmas! but also a fair portion of its plot). Apparently they figured they’d save the classic songs for their holiday record, Glee: The Music, The Christmas Album, a title that could probably be a little less cumbersome. Most of the following tracks appear on the holiday album as well.

1. The Most Wonderful Day of the Year (from Rudolph the Red-Nosed Reindeer)
Early in the episode we get a scene of the Glee kids dancing around a Christmas tree, putting up decorations and emoting this super-cheery holiday song. At this moment the episode looks and sounds precisely like most other holiday TV specials, and not in a good way.  Watch the Glee version

2. We Need a Little Christmas (from Mame)
In a nice bit of Glee humor, the club kids decide to go caroling for their fellow classmates with this song from a 1966 musical originally sung by Angela Lansbury. The students in the audience do not take it well.

3. Merry Christmas Darling (The Carpenters)
Rachel (Lea Michele) uses this track, a number one 1970 single from the Carpenters, to attempt to win back Finn’s love. It doesn’t work, but her performance (complete with fake snow!) is pretty cool.  Watch the Glee version

4. Baby It’s Cold Outside (Frank Loesser)
Frank Loesser composed this non-specific wintertime duet in 1944 and it’s been making the rounds ever since. Recently the song was famously performed by Zooey Deschanel and Leon Redbone for the Will Ferrell movie Elf. Here Kurt (Chris Colfer) and quasi-boyfriend Blaine (Darren Criss) give the tune a genuinely sweet reading.

5. You’re a Mean One, Mr. Grinch (from How the Grinch Stole Christmas!)
Glee seldom incorporates nondiegetic music, but this episode features a rare exception in which this classic television tune plays while Sue pilfers the glee club’s Christmas tree and presents. The episode gives no indication of who’s actually vocalizing the song, but the album makes it clear: this track is sung by Matthew Morrison (Will on the show) and celebrity guest k.d. lang (also, check the slight lyric change)!  Watch the Glee version

6. Last Christmas (Wham!)
This 1984 Wham! classic has been covered almost as many times as its ancient Christmas song brethren, including recent notable takes from Jimmy Eat World and Taylor Swift. Here Rachel and Finn (Cory Monteith) use it to mark their lost love in a sparkling performance of this pop gem.

7. Welcome Christmas (from How the Grinch Stole Christmas!)
Another track from the 1966 Christmas cartoon classic bookends this episode of Glee on a fairly solemn note. Interestingly, this track is not available on the Glee Christmas album. As with the opening “Most Wonderful Day of the Year,” this song most completely brings us into the world of typical televised holiday specials with all the schmaltz one can take.  Watch the Glee version