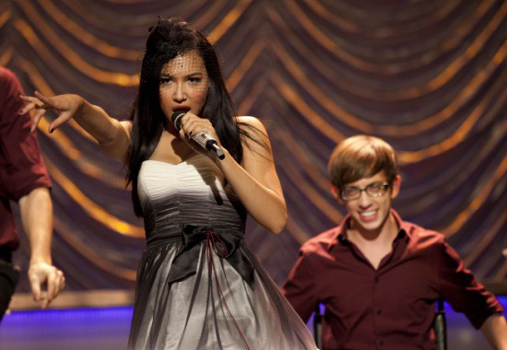 In “Special Education,” the McKinley High School glee club travels to the sectional competition, where they face off against octogenarian show choir the Hipsters as well as the Warblers from Dalton Academy, where ex-club member Kurt Hummel now makes his home. Personal tensions threaten to tear the group apart when they need to secure a win that will take them on to regionals and then nationals in New York City.

Last season, Glee‘s two “competition” episodes gave its cast a chance to really show what it could do by placing them on a stage. Critics and fans alike tend to rank those two episodes (“Sectionals” and “Journey”) highly, based in no small part on the strength of their musical performances. “Special Education” follows suit and expands both the amount and diversity of its music from the past few episodes. In fact, this episode marks Glee‘s first foray into indie music – it features a track from U.K. sensation Florence and the Machine. That’s a pretty significant barrier for Glee to cross, and it opens a lot of doors for the show. Can you imagine what those kids might do with the New Pornographers or Arcade Fire?

Anyway, we can dream tomorrow. Here’s all the songs covered in Glee‘s “Special Education”:

1. Don’t Cry for Me Argentina (from Evita)
This song comes from the mega-popular 1978 Andrew Lloyd Webber/Tim Rice musical and got a pretty famous makeover in 1996 when Madonna sang it for the Evita film adaptation. Glee actually gives us two versions of the song, one from Rachel (Lea Michele) and the other from Kurt (Chris Colfer). Though in the show they’re cut together, people who purchase the songs on iTunes can buy both versions and then splice them together on their own, or something. Watch the Glee version.

2. Hey, Soul Sister (Train)
In 2010, “Hey, Soul Sister” could not be escaped. Not only has it been the best selling song in the US so far this year, but nary a television commercial break goes by without some company or other shoving that cheery mandolin intro in our faces. Here, the Dalton Academy Warblers, fronted by Kurt’s new boyfriend Blaine (Darren Criss), continue their love for ubiquitous pop hits (first introduced in “Teenage Dream”) with an a cappella rendition of “Sister” that’s sure to make the ladies swoon.

3. The Living Years (Mike and the Mechanics)
Did anyone else forget this song existed? Old folks choir The Hipsters (get it?!) perform this 1989 hit in a too-brief scene. The show doesn’t really explain why a group of senior citizens can perform in what’s ostensibly a high school choir event, but since when does Glee need to make sense? Anyway, the full-length version of this song (again available on iTunes) is really pretty good. Watch the Glee version.

4. Valerie (Amy Winehouse & Mark Ronson)
Glee credits “Valerie” to Amy Winehouse, but that’s only part of the story. Her version of “Valerie” comes in the form of a team-up with English rocker Mark Ronson, and that version is itself a cover of a 2006 song by Liverpool indie band The Zutons. In that sense, one might imagine that Glee had done two indie songs in one show, but really the Winehouse/Ronson rendition of the song found more of an audience than The Zutons’ ever did. New Directions here performs it as part of their sectionals routine and thankfully features the lead vocals of Santana (Naya Rivera) who never, ever does a bad job when the show puts her in the spotlight.

5. Dog Days are Over (Florence and the Machine)
Not only does Glee feature an indie song for the first time (R.E.M. doesn’t count), but it actually uses it as the closing number of one of its tentpole competition episodes. It also gives lead vocals to the under-utilized Mercedes (Amber Reilly) and Tina (Jenna Ushkowitz). Surprises abound! Watch the Glee version.

6. (I’ve Had) The Time of My Life (from Dirty Dancing)
This could be Glee’s “Don’t’ Stop Believin'” for the season. A really corny but loveable ’80s song performed with gusto by a group of teenagers? Yeah, that’s a winner. In a rare treat, Quinn (Dianna Agron) and Sam (Chord Overstreet) get a chance to rock the lead vocals and have a blast with some dirty dancing of their own. All in all this episode changed up not only Glee‘s typical musical selection but also which of its incredibly talented cast it featured, and that’s always a welcome occurrence.