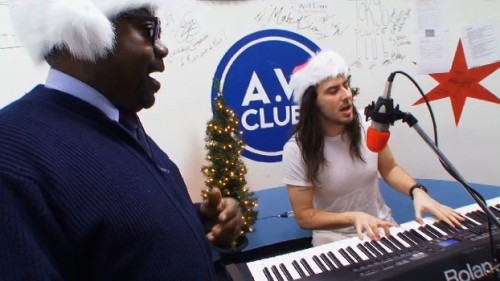 In that case, we raise you Andrew W.K. singing “Silent Night” with a random mailman. That weird enough for ya? During Andrew’s taping for the A.V. Club’s ongoing Holiday Undercover series, the neither-snow-nor-rain Postal Service came by just as Andrew was wrapping up. Rodney the mailman, the coolest postal carrier since Mr. McFeely, gamely joins in for one more round. The unlikely duo rip it up in the most genuinely joyful performance we’ve seen yet.

As Rodney exclaims at the finish, “Put that in the books!” (via The A.V. Club)

4 Responses to “Andrew W.K. Sings Silent Night with a Mailman”