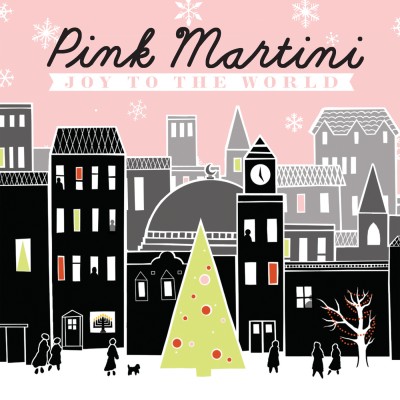 For some, Christmas music brings back memories of simpler times, of family gathered happily around a warm fire on a cold winter’s night. Others find it annoying at best, like Halloween candy. Sweet and satisfying for the first few bites, it soon leaves you feeling bloated, short-tempered, and just waiting for the pain to recede. Anyone who has rushed around the mall trying to find last-minute gifts the week before Christmas while being subjected to “Feliz Navidad” for the 500th time probably falls in the latter category.

Even in this relatively hostile environment, lounge-jazz-indie-pop combo Pink Martini decided to wade into the ocean of holiday albums with their fifth release, Joy to the World. In typical Pink Martini fashion, they tackle the 14 tracks using a variety of different musical genres and singing in several languages. Yet, through it all, despite the eclecticism, the album does not sound like a compilation; it sounds like one band.

Often, they take a traditional approach to the songs. Opener “White Christmas” bears a striking resemblance to Bing Crosby’s 1942 original. They deliver “Shchedryk (Ukranian Bell Carol)” in the original Ukranian, with a full choir and only a subtle brushed shuffle to hint at their trademark groove. Of course they go retro as well, presenting “Santa Baby” Patti Page-style, but with a sexier vocal. Their arrangement of “Do You Hear What I Hear?” would have fit perfectly in Elvis’s ’68 Comeback Special.

Even when they stray from traditional presentations though, they still show respect for the songs. “Little Drummer Boy” builds slowly, powered by an insistent, percussive beat and stunning vocal. Album highlight “We Three Kings” features a driving groove, haunting string arrangement and Miles Davis-style muted trumpet. It wouldn’t have sounded out of place in an after-hours Manhattan jazz club circa 1960. They conclude the album with a samba version of “Auld Lang Syne” where the vocal switches seamlessly between English, Arabic and French.

Pink Martini followed the blueprint for a great holiday album, walking the line between traditional and challenging without degenerating into parody. If you hate Christmas music with a passion, this album probably will not convert you. For everyone else this would make a great addition to your holiday oeuvre.

One Response to “Review: Pink Martini, ‘Joy to the World’”