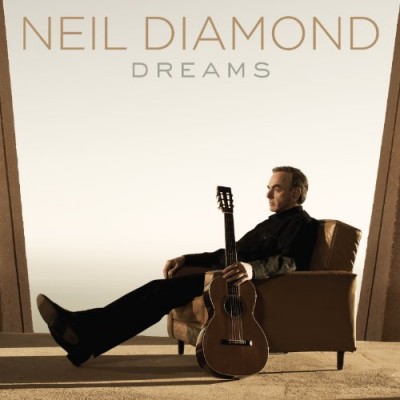 What Neil Diamond means to you depends on your frame of reference. It could mean The Jazz Singer film and soundtrack with the iconic hit “America.” It could mean singing “Sweet Caroline” during the eighth inning of Red Sox games. It could even mean Will Ferrell parodies on Saturday Night Live, but few don’t recognize the name. A prolific songwriter and performer, Neil Diamond sells out arenas and, unlike certain schmaltz-rock peers (read: Billy Joel), regularly releases new material. On his newest disc Dreams, Diamond interprets classic songs by Bill Withers, Leonard Cohen, Randy Newman, The Eagles and others. Johnny Cash‘s American series remains the most obvious point of comparison for any aging singer releasing back-to-roots covers, but unlike Cash, Diamond chose not to cover any current artists. He didn’t exactly unearth any buried treasures either. No, he chose to cover songs like “Hallelujah” (over 200 covers to date) and “Ain’t No Sunshine” (144). Interpreting standards is a tricky business and albums turn out badly if the artist doesn’t choose the songs and arrangements with care. We’re looking at you, Rod.

Dreams starts strong with a cover of Bill Withers’ “Ain’t No Sunshine.” Stylistically, Diamond’s version doesn’t stray far, but strings, piano, and organ fill out the spare arrangement of the original. The Beatles’ songs included here, “Blackbird” and “Yesterday,” two of the Fab Five’s most-covered tracks, do not stand out in any way. The minor changes made by Diamond complement his voice well enough, but don’t unearth any meaning or insight you haven’t heard a hundred times before. The pair of Randy Newman covers, “Feels Like Home” and “Losing You,” marry well with the road-weary timbre of his voice and remind us how concisely Newman can tell stories. Gilbert O’Sullivan’s “Alone Again (Naturally),” one of the more upbeat suicide songs around, benefits from the mature tones in Diamond’s voice, bringing O’Sullivan’s hopelessness sharply into focus .

While none kill the record on their own, the missteps just keep coming. On his cover of “Hallelujah,” Diamond draws inspiration from Jeff Buckley’s version of the song rather than the original. This cliché choice does nothing to differentiate his version from the other 200 versions we can choose from. “Desperado” highlights an eccentricity in Diamond’s phrasing on this album. Rather than hold the “oooh” at the end of “Desperado,” he clips the note short. These abrupt breaks become increasingly annoying as the song progresses.

Diamond actually sings one original on Dreams, but not all listeners will realize he penned “I’m a Believer.” His version, released as a single five years after The Monkees’ #1 hit, never charted. In the current revision of his song, Diamond slows the tempo, replaces electric guitar with acoustic, and sucks all the fun out of the song. The song’s tone suggests Diamond is locked in a basement, chained to the water heater. That gives the line “I couldn’t leave her if I tried” a completely new meaning. It’s not pleasant.

Neil Diamond’s Dreams will not bring him a new legion of fans, but Diamondheads will enjoy his safe interpretations. Diamond puts his stamp on several songs, highlighted by his cover of Gilbert O’Sullivan’s “Alone Again (Naturally),” making it worth taking the album for a spin.

Check out more Neil Diamond at his website or on MySpace.