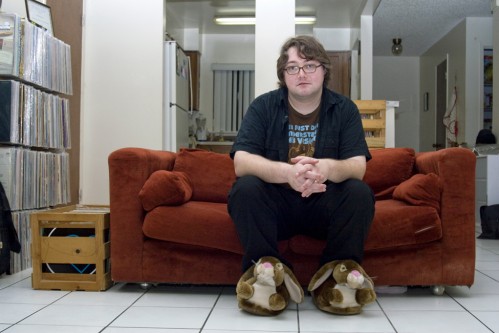 We last heard from Marc with a C with his acoustic rendition of Weird Al’s “Good Enough for Now.” That song came off Marc’s Share the Covers, Bitch! (Part Two) his pay-what-you-want cover disc (get it here). That album only dropped this past January, but next month he returns with Part Three! It finds him covering everything from the ubiquitous “Bed Intruder Song” to “Maxwell’s Silver Hammer” (both available here). Now Cover Me premieres another track from the disc. Marc sent us a lengthy introduction that explains the song’s genesis.

A few years ago, I was vinyl shopping with my best friend and occasional musical accomplice, Chris Zabriskie. He holds up a copy of Men At Work’s Business As Usual and asks me if it’s any good. I tell him that, yes, I like the album very much but I hadn’t heard it in a long time and wasn’t sure how well it had aged… but since it was only a buck, I thought there was no way he could miss by picking it up. Now, for various reasons, Chris was a bit sheltered when it came to many pop records that were otherwise ubiquitous upon initial release. He called me later that night after hearing “Who Can It Be Now?” and asks me why the song wasn’t pretty much the biggest pop single of it’s time. I had to tell him that it actually was not only quite well known, but that the tune was also a number one hit for the band. This exchange is what led to me rediscovering just how phenomenal Business As Usual was as a pop record.

“I Can See It In Your Eyes” is easily my favorite song from the album, and in it’s original incarnation, it follows in the grand pop tradition of “relatively happy music, super sad lyrics” that was all the rage in the early part of the eighties. But man, those lyrics are so devastating on their own that I thought it might be fun to try the tune in a completely morose manner to accentuate the rather depressing subject matter.

I recorded the track moments after waking up, so if I sound groggy and my voice doesn’t seem to be working like it usually does, you’re spot on. I wanted to nail the “just woke up and realized what had occurred the previous evening” vibe that I always took away from the lyrics. Of course, anyone sounds like a vocal amateur in comparison to Colin Hay, so I’m glad I have a good excuse for it on this version. It’s probably the most dramatically reworked song on my new covers record, and seriously, the best I can ask for is that this rendition might lead some folks back to Business As Usual to appreciate it not just as a period piece, but as the fantastic LP it rightfully deserves to be remembered as.