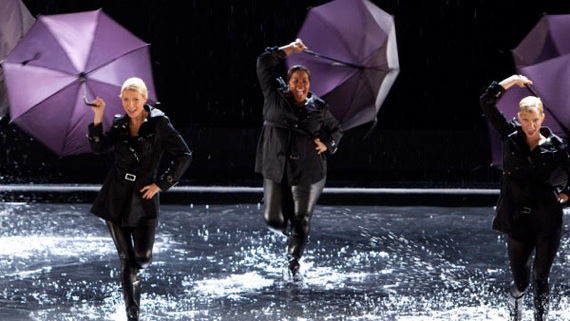 Despite that imbalance, musically I thought last night’s episode did a pretty good job. If the last two episodes are any indication, it seems as though Glee is scaling back the number of songs per episode but giving us full performances of all of them. I’m happy to make that trade; one of my biggest peeves in all of coverland is a performer not finishing what he or she starts. Ask any of my friends how I react when a cover band only plays half of a song. It’s not pretty.

Anyway, even though it only featured four songs, “The Substitute” packed a lot into its running time. When a nasty flu strikes McKinely High, Mr. Shue has to take some sick days, leading substitute teacher Holly Holiday (Paltrow) to take charge of the glee club. Her carefree attitude leads the students to experimenting with songs they might not otherwise touch; this teacher doesn’t care about finding another Journey song for the kids to cover!

1. Forget You (Cee-Lo Green)
Anyone who follows this blog (or pop culture) regularly knew this was coming. The cast looked like they had a lot of fun performing one of this year’s biggest songs, which gave Gwyneth Paltrow the lead vocal, but it didn’t work for me. In the comments for the “Rocky Horror” episode roundup a few weeks ago, one of our readers complained about John Stamos’ autotune in “Whatever Happened to Saturday Night?” I couldn’t detect any hint of it in that song, but I can only imagine what that poster was feeling here. Although Glee doesn’t shy away from autotune, its use on Gwyneth seemed more liberal than usual. Although I loved the way she acted the part with abandon, her singing definitely left something to be desired. Still, I know “Forget You” drew a lot of attention to the show, so you’ll probably want to see it.

2. Make ‘Em Laugh (Singin’ in the Rain)
On the other hand, I totally loved this remake of a classic scene from the 1952 musical Singin’ in the Rain. Staged as part of Will’s (Matthew Morrison) fever dream, he and Mike Chang (Harry Shum) perform this wacky number with infectious gusto. It’s not a big production, but I implore you to click the link and watch this scene. Your sense of humor demands it!   View the Glee version here!

3. Nowadays / Hot Honey Rag (Chicago)
Rachel (Lea Michele) decides to strut her stuff to this song from the 1975 musical Chicago after Holly frees her from Will’s chains of classic rock oppression. Holly also acts as Rachel’s partner. Again, the actual performance aspects excel, but Gwyneth’s autotune kills it for me.  View the Glee version here!

4. Singin’ in the Rain / Umbrella (Singin’ in the Rain / Rihanna)
Two weeks in a row with mash-ups? If you read last week’s roundup you’ll know I’m generally a fan of Glee‘s song-mashing. Although this whole-choir performance didn’t thrill me the way “Stop! In the Name of Love / Free Your Mind” did, I certainly give its props for its creativity and, again, its choreography.