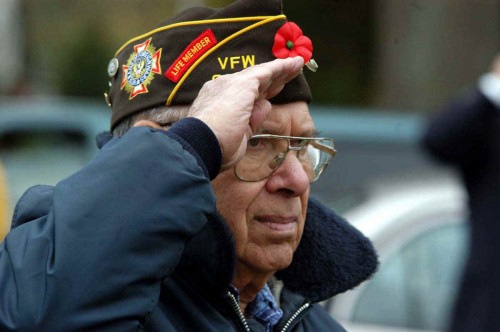 Enter Alfred King. The shoe salesman in Emporia, Kansas (2000 Census population: 26,760) had a son fight in World War II and decided that veterans, who didn’t die (after all, they had Memorial Day), deserved celebrating more than a failed treaty. He campaigned tirelessly to change the holiday, starting at home; in 1953, Emporia became the first town in America to celebrate Veterans Day. The idea caught on and, with help from a local congressman, the issue moved to Washington. On October 8, 1954 President Dwight Eisenhower officially changed Armistice Day to Veterans Day. All thanks to one small-town shoe salesman.

So, instead of the usual songs-about-soldiers set, we celebrate America’s veterans a different way this year: by remembering Alfred King, the small-town retailer who took up their cause. When he wasn’t pushing his ideas to the president’s desk, he was clothing the feet of Emporia, so it seems only fitting our Veterans Day post should focus on…shoes.

Alfred King probably never had to shoe angels whose wings had rusted…but you never know.

The soundtrack to the best Disney movie never made: The Jolly Shoeshine Boy.

Dylan recorded this song in 1982, but never released it (though it almost appeared on The Bootleg Series Vol. 1-3). King’s harmonica-driven version in 1999 is the first we heard it.

The Fixx – These Boots Are Made for Walkin’ (Nancy Sinatra cover)

This one comes from 2002’s terrific When Pigs Fly compilation, which features unlikely cover pairings like Herman’s Hermits swinging through “White Wedding” and Billy Preston country-frying some Duran Duran.

Another selection from Phish’s 2010 Halloween show, where they covered Little Feat’s entire Waiting for Columbus.