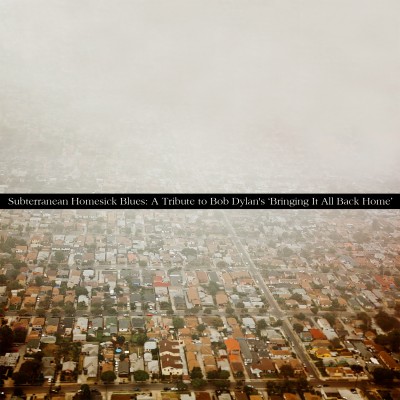 While listening to covers of Bob Dylan, it is important to not sit around waiting for his raspy voice to suddenly appear… after all, it is being covered by someone else. Subterranean Homesick Blues: A Tribute to Bob Dylan’s ‘Bringing It All Back Home’ brought together artists like The Morning Benders, J. Tillman of Fleet Foxes, and Laura Veirs to channel the folk from before they were born. They cover the album in its entirety, closing with five covers of outtakes from the original recording sessions.

Staying true to the original, the first half of the album is electric. It felt forced and over-produced for most of the tracks, especially Peter Morén’s “Subterranean Homesick Blues.” The original novelty of an electric Bob Dylan gets lost in the opening song with too much noise. It did work for Mirah’s “Love Minus Zero/No Limit,” with a peacefully haunting hum.

The acoustic second half translated smoothly. “Mr. Tambourine Man” by the Helio Sequence was compelling and heartfelt, reminding us why this is such an epic track. The outtake songs were executed best. The album closes with Laura Veirs and William Fitzsimmons, who contrast the famous Bob Dylan gruff with their smooth sound. Veirs’ “Mama, You Been On My Mind” comes and goes so quickly that it leaves you wanting more. And “Farewell Angelina” by Fitzsimmons takes you through a gentle haze all the way to the end.

3 Responses to “Review: Subterranean Homesick Blues (A Tribute to Bob Dylan’s ‘Bringing It All Back Home’)”