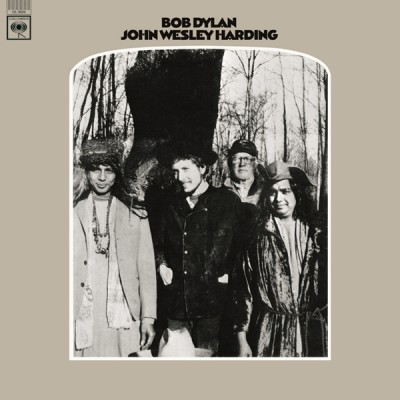 For the first segment, in honor of the soundtrack to the movie I’m Not There, which came out yesterday, we’re gonna hit you up with some Dylan covers. Specifically, every song from his return-to-roots ’67 album John Wesley Harding. The original shocked everyone with its acoustic instruments, Biblical imagery, straightforward story-songs, and lack of choruses. These short, spare songs have lent themselves to loads of covers over the years, many quite different from the originals.

The lead singer of Wilco performed this little ditty frequently on his solo tour in ’05. This faithful reading comes from his hometown concert at Chicago’s Vic Theater on March 4 of that year and features the same spastic, swirling harmonica playing that Dylan plays on the original.

Mira Billotte – As I Went Out One Morning

From the movie soundtrack mentioned above, this cut features the lead singer of folk band White Magic lending her alto to one of them album’s less-known tracks. The drums are more prominent than the original, and the acoustic guitar interludes are pretty enough, but something about her voice is perfect fore this song, melodic without being overpowering.

Off her ’02 album Songs From the Gutter (which, incidentally, featured a cover of the Springsteen song from which this blog gets its name), another pretty female voice sings what some think of as the companion song to the previous. It’s certainly louder, though, swathed in echoey guitar and waves of reverb.

Tom Landa and the Paperboys – All Along the Watchtower

Almost every cover of this song takes its cue from the famous Hendrix cover, so I tried to find a version that acted as if Jimi had never existed. And this Celtic jig version sure fits that mold.

Garcia’s mandolin partner-in-crime Grisman (the guy who played the instrument on Ripple) joins him here for a duet on the longest song of the album, clocking in at seven minutes. Garcia, incidentally, performed this song with Dylan himself when the Grateful Dead toured with him in ’87.

Yeah, he showed up, but not on the song you expected. Dylan’s certainly heard this version though, as he copped the style in recent years. And doesn’t that riff sound like Cream’s Crossroads…?

The phrase “powerhouse performance” was made for recordings like this. Horns and organ usher in her banshee wail as she tears this polite request for freedom apart.

Limestone and Joy – I Am a Lonesome Hobo

I can’t find much information about this group, but they take this dirge at double speed, harmonies and all. The question of whether the lyrics warrant a song that sounds so fun is another matter.

Joan’s covered most of the songs here at one point or another, so she had to show up somewhere. With a piano backing instead of her normal fingerpicking, she seems to reign in her voice, keeping the lyrics at the fore.

With her recent cover album, Patti’s talent for reinterpretation is finally being given its due. This is no Gloria, but it’s memorable anyway, as she ditches the riff that permeates the Dylan version in favor of noise and screaming.

Duane Allman & Johnny Jenkins – Down Along the Cove

This duo takes Bob’s blues song, and plays it like a blues songs, with bopping piano, and plenty of slide guitar and harmonica soloing.

The bastard child of the album in its country tone, this one understandably lends itself to a lot of dribbly covers. Harris’ tricky guitar playing helps redeem the song from sentimental mush.