In Defense takes a second look at a much maligned cover artist or album and asks, “Was it really as bad as all that?” Check out past installments here. 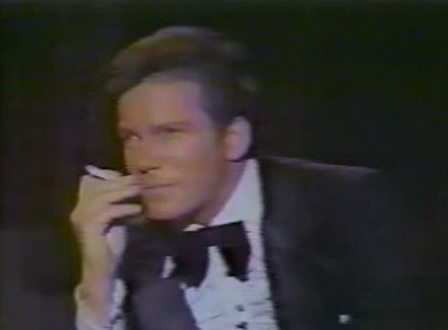 William Shatner’s take on the classic Elton John/Bernie Taupin tune “Rocket Man” has an awesome power—people know it without ever having heard it. It seems to exist in our culture purely as a punchline, a go-to gag to illustrate the depth to which Shatner’s career had fallen post-Star Trek. And this is a joke everybody’s in on—sources as diverse as Beck (in his video for “Where It’s At“), Freakazoid, and Family Guy have all taken a few shots at Shatner for this one. But is it really so awful?

At the very least, there’s no denying that Shatner’s “Rocket Man” is very, very weird. The man who was Captain Kirk performed this song as a tribute to Bernie Taupin at the 1978 Saturn Awards ceremony, and audiences have wondered why ever since. Before we get too far into discussing this strange cover, let’s take a look at the video.

Truthfully, even if you’re going in academically, it’s hard not to laugh at parts of Shatner’s cover. Whether it’s the overly-serious delivery when he proclaims he just doesn’t understand science at 2:30 or the arrival of Dancing Kirk at 3:18, sections of this song (if not the whole thing) are just hilarious. I can’t imagine a more appropriate first response than confused guffawing.

But, after all, that’s only a first response.

This is not to deny that Shatner’s cover isn’t funny, because it is. But I think it’s more than that. The key to understanding where Bill is coming from here is in how the song is staged—there’s three different Shatners singing, each with a different tone and cadence. Shatner #1 is calm and cool, smoking a cigarette and acting aloof, describing his space-faring job as he might any other profession. Shatner #2 speaks boldly, like he’s channeling the spirit of an adventurer about to conquer the great unknown, but sometimes there’s a crack in his voice or a downturn in his expression that indicates he may be feigning the enthusiasm. Shatner #3 is a dancing fool, totally jubilant about his job—he gets to hang out in outer space! It’s an interesting dissection of the multi-faceted feelings of this song’s narrator,  bolstered by the fact that Starfleet Captain James T. Kirk is the one delivering the lines.

What makes Shatner’s “Rocket Man” so funny is its over-earnestness. It takes itself very seriously. That’s also what makes it charming. In a way, it offers a handy prism through which to view the whole of Shatner’s career. It’s like that scene in Star Trek III where Klingon leader Kruge (played by Christopher Lloyd) murders Kirk’s son in cold blood. Shatner, standing taut on the bridge of his ship, stumbles back, falls into a slumped position on his captain’s chair, and utters (in the standard Shatner cadence) “You Klingon bastard…you killed my son. You Klingon bastard!” If you only look at that scene, it’s kind of funny and ridiculous, but if you’re caught up in the reality of the movie, I think it’s actually some pretty powerful acting. You rarely see a confident leader like Kirk so deflated. My point is that something can be both a little silly and an interesting performance piece, depending on how one wants to look at it.

I think Shatner’s “Rocket Man” is both of those things. There’s no reason why we shouldn’t have some fun with it, but if you can get past all that, there is actually something kind of interesting going on. On Has Been, his 2004 collaboration with Ben Folds, Shatner proved that he can make legitimately good music. Maybe that was apparent all along, if only we’d looked.