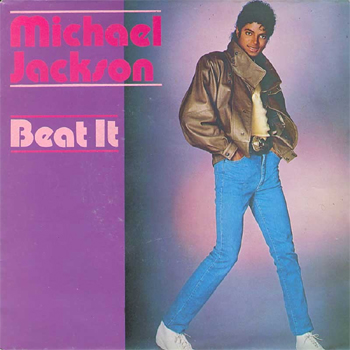 While Michael’s death last year sparked a flurry of YouTube tributes to the King of Pop, “Beat it” has generated a wide range of interpretations ever since its debut. Ranking #337 on Rolling Stone’s “500 Greatest Songs of All Time” list, its popularity has inspired artists worldwide, from off-key amateurs to Fall Out Boy (ft. John Mayer, no less). Here are five of the best.

1. We start with California indie jazz/indie rock band Pomplamoose. Multi-instrumentalists Natalie Dawn and Jack Conte have created a version that sounds like Feist and Regina Spektor getting together and making a Michael Jackson baby:

3. Igor Presnyakov, a Moscow-born inhabitant of the Netherlands, arranges an instrumental acoustic version. It’s the perfect mix of classy and Jacko (not that crotch grabbing can’t be classy):

4. Naturally, there have been quite a few live covers of Michael’s songs, especially immediately following his death. “Beat it” offers loads to choose from, but Bruno Mars’ take is particularly good. He rocks a pretty mean reggae-fied version and almost manages to pull off the trademark Michael Jackson falsetto:

5. Sean Watmore (known as coconuttoes on YouTube) strums a folksy rendition of the classic. It’s not just another tribute that acousti-fies the electronic instruments and Michael Jackson’s voice. Watmore gives the melody and tempo enough of a twist that the super-danceable tune is transformed into a low-key, wistful lullaby:

Bonus. Chinese internet video director Hu Ge worked a Chinese cover into his 2007 film 007 vs. Man in Black. I have no idea if the translation is accurate, but I don’t think it really matters. The dancing is awesome (in an Asian-Gangsta-meets-Bob-Fosse way):