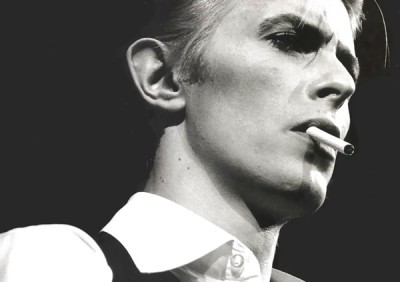 With the recent re-release of David Bowie’s 1976 Station to Station, the Thin White Duke has slunk back into the spotlight. Bowie’s last great character (this is post-Ziggy Stardust, of course) may have been his strangest. Certainly his least likeable. Wikipedia collects some good descriptions from Bowie biographers: “a mad aristocrat,” “an amoral zombie,” and “an emotionless Aryan superman.”

The drug-addled anorexic – Am I talking about Bowie or the Duke? Where’s the line? – made no secret of his predilection for harder forms of recreation. As if the waifish, glazed-over demeanor wasn’t hint enough, he performed Lou Reed’s heroin anti-anthem “I’m Waiting for the Man” as the third song on the Station to Station tour. Check out this video from a tour rehearsal. Whacked-out though he may have been, the man has charisma coming out the eyeballs.

Check out more David Bowie at his website. While you’re there, tell the man to tour!