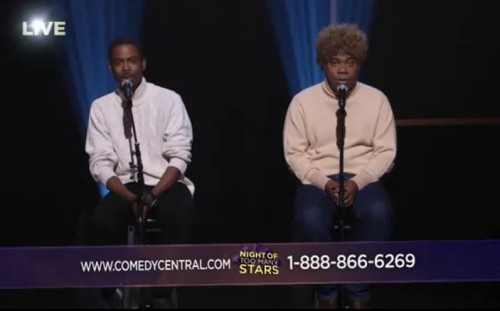 Last night’s Night of Too Many Stars took over Comedy Central to raise funds for autism. As always, it was aptly titled, with Jon Stewart, Tom Hanks, Steve Carell, George Clooney, Jimmy Kimmel, and Betty White (of course) performing and manning the phones. The high point came during Chris Rock and Tracy Morgan’s moving (ha!) duet on Simon and Garfunkel’s “Scarborough Fair.” Morgan rocks the Garfunkel jew-fro as they warble along.

One person isn’t having it though. That person is Paul Simon. Fed up with their terrible performance, he emerges to rapturous applause to coach the pair on the harmonies. “With all due respect, as a duo, you guys suck,” he says. Dude’s got a point. He tries to teach them the right words, only to be told by Rock: “The lyrics are bullshit!” The zingers fly as it slowly devolves into AutoTune. Before you know it, Paul Simon is rapping Snoop Dogg’s “Gin and Juice” (happy b-day Snoop!) No lie. Watch it below. Right now.

Learn more about Night of Too Many Stars and you can fight autism here.