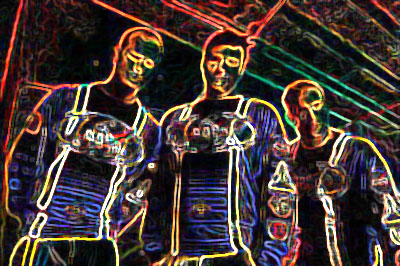 The super dated synths of Electric Light Orchestra’s original “Here Is the News,” off their much-derided Time album, get a boost with some new patches for a fresh 2001: A Rock Odyssey sound. Like a harder-rocking “Space Oddity,” it’s totally absurd and totally epic.

Though we’ve never posted anything by Brave Saint Saturn before, we have posted something pretty close. Brave Saint Saturn is three members of Five Iron Frenzy, whom we recently Song of the Day-ed for their cover of another ELO song: “Sweet Talking Woman.” Singer Reese Roper blasts the heck out of both, making us want him to record a full ELO covers album with whatever band he’s part of (actually, I think he’s currently in nursing school).

Check out more Brave Saint Saturn at their website.

One Response to “Song of the Day: Brave Saint Saturn, “Here Is the News” (ELO cover)”