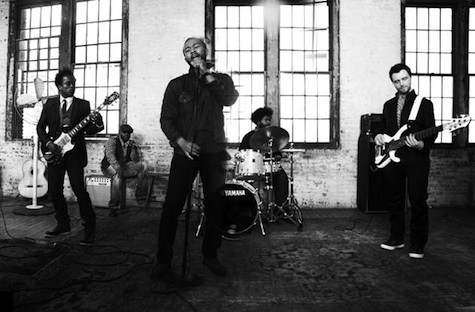 Back in July we got a first peak at John Legend and the Roots’ upcoming protest-music cover album. Their version of “Wake Up Everybody” was tight (in both senses of the word), but nothing mind-blowing. Guess they were saving that for the second look. Well, it’s here, and…wow. Their version of Bill Withers’ 1973 lament “I Can’t Write Left-Handed” is an absolute barn-burner. The studio clip below lets you watch it all come together. They run through cycle after cycle of build and climax, each peak higher than the one before. This goes on for eleven glorious minutes.

Legend croons and Questlove executes some precision drum rolls, but the real star here may be guitarist “Captain” Kirk Douglas. He adds brilliantly understated licks behind each Legend line before unleashing a typically nutso solo. Relegated to the sidelines, MC Black Thought nods approvingly. (via 2dopeboyz)

Check out more from John Legend at his website. Wake Up! drops September 21.

3 Responses to “John Legend and the Roots: Eleven Minutes of Soul”