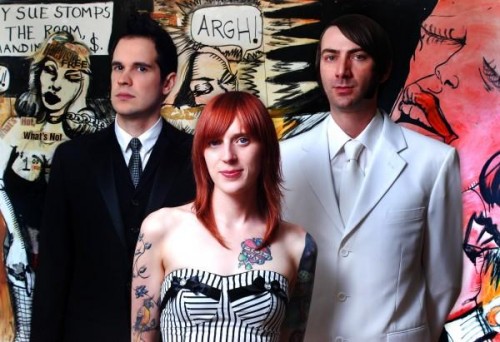 Add a touch of spooky glam and you’ve got killer cover-song potential. The trio delivers. They’ve appeared on tribute albums to David Bowie, Radiohead, and Nick Cave. For each they prepared a video using found or filmed footage (similar to what we saw from The Peptides). For “Boys Keep Swinging,” a faceless girl cryptically explores her apartment. “The National Anthem” (the Radiohead song) blends public-domain footage of girls dancing with creepy A-bomb PSAs. Finally, The Birthday Party’s “Wild World” uses footage from a ’60s zombie film called Carnival of Souls (yes, it is streaming on Netflix).

We checked in with Ivan to find out more about each cover. See what he has to say, then watch the videos.

Ivan says: “Boys Keep Swinging” is the first song we ever learned to play together and the first song we recorded. The song’s got some tongue-in-cheek quality. It helped us be serious musicians but not take ourselves too seriously. I credit it with pointing us in the right direction.

Ivan says: Since Mr Russia has no guitars, “The National Anthem” made the most sense for us to put our touch on. We wanted it to sound like the original with heightened adrenalin.

Ivan says: This song is really atmospheric if you listen close you can hear all sorts of things that go bump in the night, from footsteps to running water and human bones clanging together.

Check out more from Mr Russia at their website, MySpace, or YouTube.
Cover Me is now on Patreon! If you love cover songs, we hope you will consider supporting us there with a small monthly subscription. There are a bunch of exclusive perks only for patrons: playlists, newsletters, downloads, discussions, polls - hell, tell us what song you would like to hear covered and we will make it happen. Learn more at Patreon.