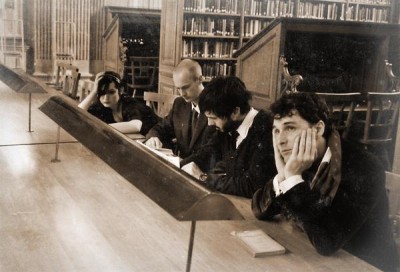 The Vatican Cellars’ cover of “Runnin’ with the Devil” adds the orchestrated-folk touch you didn’t realize the song was missing. Over strummed guitars, brushed drums, what sounds like an accordion (?), and the aforementioned cello, Simon Hughes and someone who goes by “The Birthday Girl” harmonize so sweetly you forget the leotard-ed origins. Presenting…the most adorable hard rock you’ve ever heard.

Incidentally, this track comes from Where It’s At Is Where You Are, which is quickly establishing itself as a label for cover lovers to watch. Last year they released the Bruce Springsteen tribute album that earned our #2 Cover Album of the Year slot. Not at all coincidentally, the song we posted back to showcase the tribute was by – you guessed it – the Vatican Cellars (they did “Darkness at the Edge of Town”).

Check out more from the Vatican Cellars at MySpace. Download the a-side here.