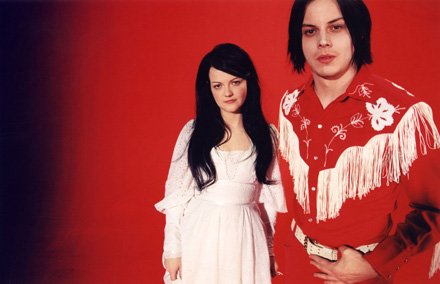 Ask anyone under thirty who sings “Jolene,” and you’re likely to get the same answer: the White Stripes. Even if they did know Dolly Parton performed it first, odds are pretty good they’ve never actually heard that version. Jack and Meg have made it, along with Son House’s “Death Letter,” their signature cover.

The White Stripes have a long history with Conan O’Brien. Their worlds first converged at a Detroit bowling alley, where the unknown pair approached the television star as fans. Fastforward to 2005, when O’Brien returned the honor by giving the Stripes a full week on his show. They performed “Seven Nation Army,” “The Hardest Button to Button,” “Jolene” (below), and “Let’s Build a Home/Going Back to Memphis.” Soon after they released a music video that twisted Conan’s late night world through a funhouse mirror. When Conan left Late Night for that long and illustrious Tonight Show gig, who reunited for a last-show performance of “We’re Going to Be Friends”? You guessed it.

Check out more Whites Stripes at their website or MySpace.