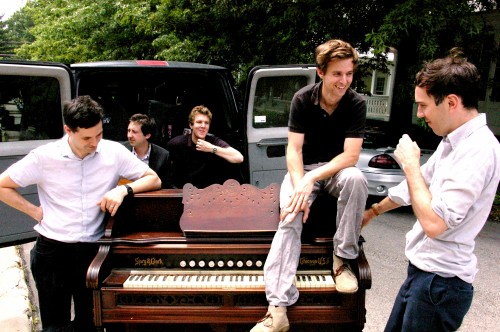 We reminded you last week that all good things must end. Well that end has arrived. We’ll get to that in a minute, but first let’s look back. The A.V. Undercover series gave us a good run of indie-classic matchups. First we heard the Antlers croon/moan through “Wish You Were Here.” Then Frightened Rabbit went all Scottish-downer on the Lemonheads. The Swell Season raised our spirits again with some “Two-Headed Boy Pt. 2.” Then last week Tokyo Police Club dragged us through the mud with a grungy “Everybody Wants You.”

And now here we are. The final installment. Don’t worry though; it’s a doozy. Since each band crossed the song they chose off a list, the final band had no choice at all. Through hell or high water, the Walkmen had to cover R.E.M.’s “Driver 8.” They rose to the occasion though with one of the best performances yet. Organ swirls, the guitar riff unwinds, and drums roll along in what sounds like the darkest carnival ever. Check it out below.

Check out more Walkmen at their website or MySpace. Catch up on all the A.V. Undercovers – and vote for your favorites – here.