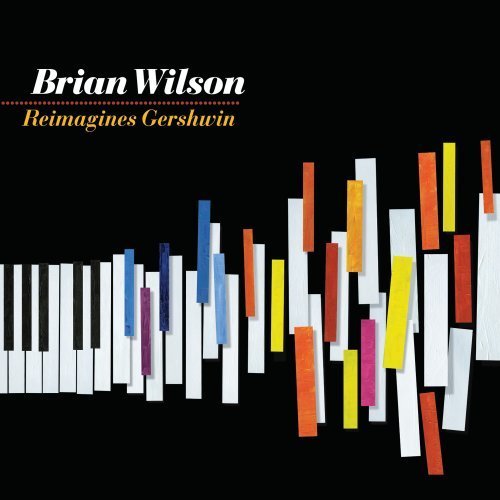 Brian Wilson first heard “Rhapsody in Blue” at age two. In his telling, he thought it was “the most beautiful thing in the world” and asked his mom to play it over and over again.

Brian Wilson Reimagines Gershwin builds on that early appreciation with an unabashedly loving tribute to a giant of American song. A few years ago George Gershwin’s estate approached Wilson with an irresistible offer: complete some of Gershwin’s unfinished melodies. Wilson whittled 114 snippets down to just two, to which he added lyrics and arrangements. In “The Like in I Love You,” muted trumpet gently introduces in a rich orchestral production that sounds as carefree as any of the early Beach Boys hits. “Nothing But Love” hits a little harder, crunchy guitar (a rarely-seen instrument on this album) ushering in a herky-jerky pep rally.

The other twelve songs rearrange existing songs. “I’ve a Got a Crush on You” evokes malt shop nostalgia while “They Can’t Take That Away From Me” recalls the barbershop quartets of Broadway musicals past. A four-song Porgy and Bess suite reaches from jazz piano (“Summertime”) to back-porch harmonica (the instrumental “I Got Plenty O’ Nuttin’”). Throughout, Wilson effortlessly bridges the gap between Gershwin and himself. The wall-of-strings production nods at the Tin Pan Alley origins, but the “wop-bop-bop” and “woah-oh-oh”s could have come from any Beach Boys 45.

Indeed, the star of the show is not Brian Wilson the Singer or Brian Wilson the Songwriter. It’s Brian Wilson the Arranger. The meticulous craftsmanship is a welcome change from the see-what-sticks approach of Smile and, to a lesser extent, follow-up That Lucky Old Sun. Wilson’s arrangements are more focused and, dare I say, inspired than they have been in years. Opera house violins and roadhouse piano blend easily, gently guiding the listener along the sunshine paths of the beautiful melodies. Just when the 1920s schmaltz threatens to overwhelm the listener, a kazoo solo jumps in.

Appropriately, the entire proceeding is contained within the framework of “Rhapsody in Blue.” Wilson stacks his vocals to the heavens in an a cappella arrangements that bookends the album. Layer builds upon layer to prove the honey-voiced surf star hasn’t lost it. Smile may be known as the lost classic, but in a way Brian Wilson Reimagines Gershwin was 66 years in the making. It was worth the wait.