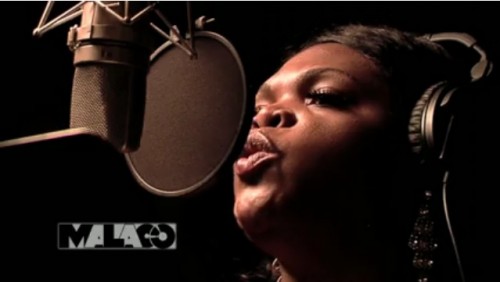 Queen Emily was a semifinalist on America’s Got Talent, but don’t hold that against her. Unlike many of the novelty weirdos on those shows, Ms. Emily David really does have talent, talent coming out the ears. Her classic soul singing conjures a vintage style left for dead by radio, recalling pioneers like Aretha Franklin (whose “Chain of Fools” she covered on the show) and Dinah Washington.

For her forthcoming album (release date TBA), Queen Emily headed down south to record with the famed Muscle Shoals Rhythm Section. Yep, that’s the same Muscle Shoals that Aretha herself cut sides with back in the day. Signed to the legendary Malaco Records label – home to Roberta Flack, the Drifters, and Bland himself – she prepared a set of old-school soul for the LP. Cover Me is pleased to premiere a track from the upcoming album.

Written by Frank-O Johnson, “No Easy Way to Say Goodbye” first appeared on Bobby “Blue” Bland’s 1987 comeback Blues You Can Use. In blues torch-song tradition, Emily’s voice soars sky-high as tears drip from every word. Backing her up is that retro sound too often relegated to dusty record store bins. This is the stuff your mama grew up on. Emily’s unstoppable performance shows us that soul may be down, but it damn sure ain’t out.

Check out more Queen Emily at her webpage (UK or US), where you can also download a free MP3 of Emily singing Johnnie Taylor’s “Still Crazy.”