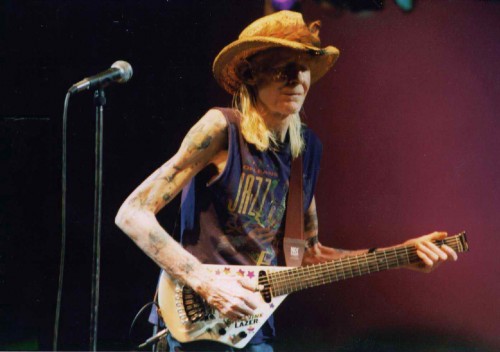 Music blogs and magazines frequently post lists of underrated guitarists. Some of these lists put Johnny Winter on them, which is silly. Everyone who has heard Winter play recognizes his talent. He’s not underrated; he’s underknown. The Texas bluesman gave one of Woodstock’s finest performances (buy it), but gets little recognition outside of blues circles. Ain’t that a shame.

One of his finest moments is an oft-performed slide guitar explosion through Bob Dylan’s “Highway 61 Revisited.” Live it can go on for up to fifteen minutes, but we’ve got a nine-minute version (gotta fit on YouTube) from 1984’s Roskilde Festival below. The anorexic (not really) albino (really) axeman plays slide like you’ve never heard, the whole time looking like he’s hardly trying. He’s scary skinny from years of heroin addiction, but his playing has all the muscle you need.

Check out more Johnny Winter at his website or MySpace.