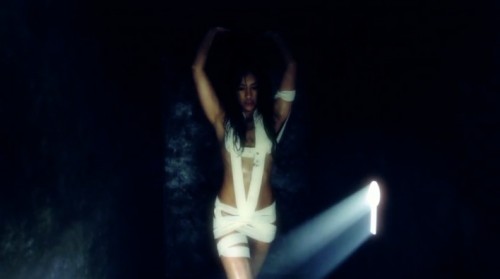 All signs point to a new Kanye West album this fall. All signs point to this signaling his return to rapping. As a result, all signs point to it being better received than his previous album, the AutoTune-assisted 808s and Heartbreak. While this is probably good news for the music world, those 808 tunes made for great covers when in the hands of people who could sing without computers. Janina Gavankar is such a person.

Fans of bad Showtime dramas may know her from her recurring role in The L Word. Fans of evil corporate behemoths may know her from her role as “Ms. Dewey,” the sassy Microsoft search engine. Fans of music should forget those two things and stick to this. Last month Gavankar released her video for Kanye’s “Love Lockdown” and, thanks to a shout-out yesterday by Twitter-er extraordinaire ?uestlove, it’s finally getting the attention it deserves.

Gavankar wanders the streets of carrying a lockbox (Al Gore, anyone?). Sometimes she welds topless at an autoshop. Other times she writhes around in a jail cell dressed in some Lady Gaga-esq toilet paper contraption. It doesn’t make a lot of sense, but it’s not like the original tribal-invasion video did either. Gavankar’s xylophone-heavy soul gets the head bobbing, but it’s the choir of multitracked vocals halfway through that blows things into the stratosphere. Watch the video and download the MP3 below.

3 Responses to “Song of the Day: Janina Gavankar, “Love Lockdown””