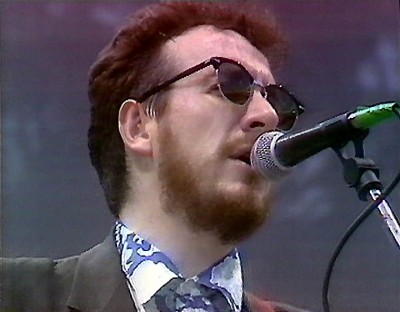 Yesterday marked the twenty-fifth anniversary of Live Aid. Whether the event was successful at relieving third-world hunger or not, it was quite a spectacle. Led Zeppelin reunited for the event. Awesome! With Phil Collins on drums. Less awesome!

Reading over the list of performers can seem like either a who’s-who or a where-are-they-now, depending on in what decade your musical sensibilities lie. What are the Thompson Twins up to these days? And has anyone heard from Paul Young lately? Maybe someone should check on him.

“I want you to help me sing this northern English folk song,” Elvis Costello says before letting loose this down-and-dirty Beatles cover. Solo electric guitar is a tough sell – the bass exists for a reason – but the fact that the pulls it off should be no surprise to anyone who has ever heard him do anything. Would it have killed them to allow him more than one song though?