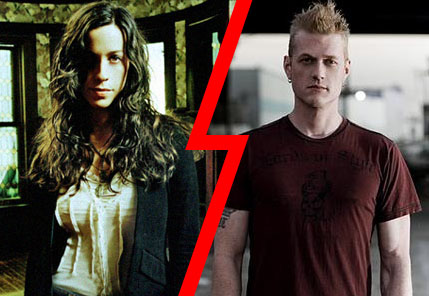 Corey TuT first crossed our radar with his Lady Gaga covers, so it seems fitting that you all picked Alanis Morissette’s “You Oughta Know” as the song for him to tackle in last month’s Cover Commissions. The man’s got a talent for off-kilter female songwriters. And off-kilter it is, as TuT took Morissette’s megahit into Nine Inch Nails territory. And you thought the original was angry!

This is definitely one of my favorite songs of the ’90s and I knew I could really squeeze the hell out of the angst in this song, but I wanted to do something a bit different. I secretly was hoping the Nine Inch Nails song [“Something I Can Never Have”] would win, because it is so spare and dark, yet very powerful. When the Alanis song won, I thought, well, what if Trent Reznor was doing it? That was my initial inspiration. I slowed it way down and started playing around with different piano lines. I love a looping, melodic, hypnotic instrumental line, and I really wanted to bring a mix of electronic and organic instruments.

Next I added the strings and some pads with that middle-easterny drum loop, which seemed appropriate for Alanis cuz she wrote that god-awful “Thank you India” song not long after this one. I quickly realized that the entire song would not sustain this treatment. I wanted it to be dark and creepy, but still RAWK! Like I had snuck up and was whispering in the ex’s ear. I knew I had to really let loose in the chorus for the song to hit home, so by the second verse I kicked the tempo back up to the original and decided to bring in the guitars and the screaming, which is sort of my natural state of existence creatively.

This mp3 may be freely shared with the artist’s blessing. Post it on your blog, send it to your friends, tweet it to the world. When you do though, please include a link to Cover Me.