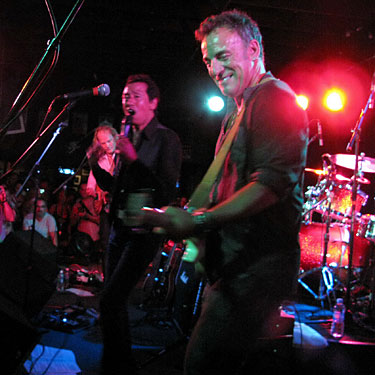 Last month we profiled the magnificent Alejandro Escovedo. Timed with the release of his new Street Songs of Love, it showcased five selections from the many covers he’s performed. The Rolling Stones choice was “Sway,” but we mentioned he often rocks “Beast of Burden” as well. Usually he does it alone. This past weekend he did it with Bruce Springsteen.

The Boss joined Escovedo and the Sensitive Boys onstage Friday night at New Jersey’s Stone Pony club, the same stage on which the Boss cut his teeth as an axeman-for-hire back in the day. Together they played Escovedo’s “Always a Friend,” as they have before; “Faith,” the new album cut on which Springsteen appears; and “Beast of Burden” to close things out. Fansite Backstreets notes that Bruce has never performed this before, but he’s a natural. The man even rips out a couple killer solos like he used to do at the Pony . Watch the video and download the MP3 (which unfortunately cuts off a little early) below.

Check out more at our profile In the Spotlight: Alejandro Escovedo.