Download This scours the web’s dark corners for freebies worth snagging. 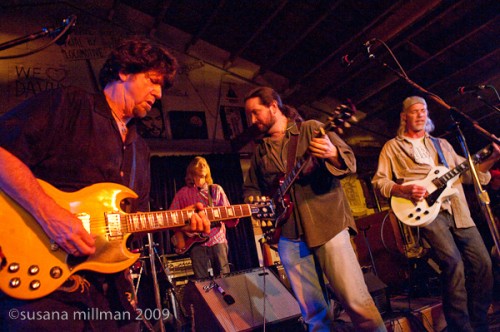 Let’s get the dirty word out of the way up front: jam band. I know, I know. But there are two types of jam band. There’s the noodley, going-nowhere-slow jam band (i.e. Phish) and there’s the tight, hard-rocking jam band (i.e. Gov’t Mule). This is most definitely the latter.

The Ghosts of Electricity aren’t even a real group. The quintet formed last Halloween to cover Bob Dylan songs (as you might guess from the “Visions of Johanna”-quoting name). To cover Bob Dylan songs for almost four hours that is. Somehow a band that has never actually played a show before sounds tighter than most seasoned veterans.

These guys are no first-timers. Singer/Guitarist Mark Karan plays with just about every post-Grateful Dead band there is, including the Other Ones, RatDog (with Bob Weir), and Phil Lesh and Friends. That night he brought two other RatDog folks along for the ride, exhibiting an intuitive stage give-and-take with bassist Robin Sylvester and pianist Mookie Siegel. Rounding the quintet out is guitarist Stu Allen (Dark Star Orchestra) and drummer Greg Anton (Steve Kimock). Hippie clown Wavy Gravy even makes a cameo (if you can call announcing a death a cameo).

They stay on the mark for 3.7 full hours, never straying into ambient noodling. It’s a stunning display of focus, particularly by Karan whose voice magically lasts the whole show. Even the songs that break the ten-minute mark (and there are nine of them) don’t lose direction. No, none of these covers dramatically reimagine the source material, but none make you hit that next button either. With almost four hours of material, that’s pretty damn good. The band plays hits and obscurities, mixing in a refreshing breadth of songs from throughout Dylan’s catalog. When was the last time you heard an eleven-minute “Standing in the Doorway”? Mr. Dylan would be well advised to ditch his current bore-machine lineup and grab these guys.

We’ve got a few samples below, along with the setlist and a link to download the entire soundboard recording in MP3 or FLAC.

Tangled Up In Blue
It Takes A Lot To Laugh, It Takes a Train to Cry
Queen Jane Approximately
The Man In Me
Just Like A Woman
The Ballad Of Frankie Lee and Judas Priest
Stuck Inside Of Mobile with the Memphis Blues Again
Señor (Tales of Yankee Power)
You’re A Big Girl Now
Highway 61 Revisited
—
Knockin’ on Heaven’s Door (w/ Wavy Gravy)
Like A Rolling Stone
Ballad Of A Thin Man
Visions Of Johanna
The Times They Are A Changin’
Things Have Changed
Idiot Wind
All Along The Watchtower
Tonight I’ll Be Staying Here With You
She Belongs To Me
I’ll Be Your Baby Tonight
Baby Let Me Follow You Down
—
Standing In The Doorway
Maggie’s Farm

Download the entire show at archive.org. It’s a soundboard recording, so as you hear above, primo audio quality.

2 Responses to “Download This: The Ghosts of Electricity (ft. Mark Karan) Cover Dylan for Over Three Hours”