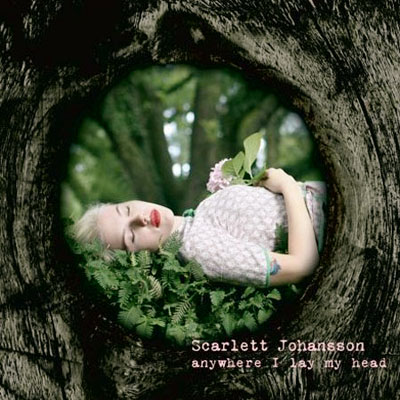 Scarlett Johansson cannot sing.  Let’s just get that out of the way up front. You know it, I know it, and I suspect Scarlett knows it. After desecrating George Gershwin’s “Summertime” on a 2006 charity compilation, she learned her lesson about trying to be Ella Fitzgerald (her Jesus and Mary Chain performance a year later is disqualified on the basis of being inaudible).

Critics panned Anywhere I Lay My Head, her album of Tom Waits covers, for largely this reason. Entertainment Weekly called it the worst album of 2008. But here’s the thing: she doesn’t really try to sing. Her sultry monotone wraps the songs in a dreamy haze, aiming for mood over melody. Johansson takes you out to dreamland just as your mother did when she sang you to sleep (and you didn’t criticize her pitch, did you?).

The album showcases songs that fit this mood. With one notable exception (the offensively bad “I Wish I Was in New Orleans”) she wisely avoids Waits’ jazz-bop ‘70s material. Anyone expecting a Norah Jones-esq piano tribute was in for a shock. Six of the ten selections come from albums Waits released since 2000, which is the popularity equivalent of a Dylan covers album that focuses on his ‘80s output. These songs benefit from her lazy meandering better than “Tom Traubert’s Blues” ever could.

Then there’s the production. Anyone not turned off by the singing likely lost it here. Dave Sitek of T.V. on the Radio washed the songs in electro-fuzz. His sonic fingerprints cover everything; this album should rightfully be labeled “Dave Sitek ft. Scarlett Johansson.” Once you wrap your mind around the idea of techno-fied Tom Waits songs though, there’s a lot to appreciate. Sitek focuses on the minute, adding up tiny snippets to create sweeping soundscapes. Witness the tinkling xylophone that slips in around the swirling drone of “Falling Down.” Open an ear of to that spacey effect in “Who Are You” that sounds like steel drums in a wind tunnel.

Let us not forget that Waits himself has been experimenting with vocal loops and effects in recent years. “Fawn,” the instrumental opener that questions whether you can call this a vanity project, might particularly intrigue him. A Hammond B3 traces the melody line, noodling around the ambient atmospherics. It’s all very mellow. Halfway through though, a timpani roll calls in the cavalry. Blaring horns and crashing cymbals submerge the melody in pomp and circumstance. The moment provides this album’s equivalent of the “In the Air Tonight” drum break, giving a hazy toss-off a dose of adrenaline.

So be not so quick to dismiss Anywhere I Lay My Head. No, it’s not the best Waits tribute out there (Billy’s Band wins that prize), but it’s one of the most creative. What by all rights should have been a cash-in vanity project became a unique recording project that, while imperfect (again, “I Wish I Was in New Orleans”), boasts inventive arrangements and nuanced production in the service of some lesser-known songs.

Oh, and if none of that did anything for you, can we at least agree that Scarlett looks gorgeous on the cover?

Check out a few samples below, then tell me why you think I’m crazy (or not) in the comments.

Scarlett Johansson – Who Are You (Tom Waits cover)