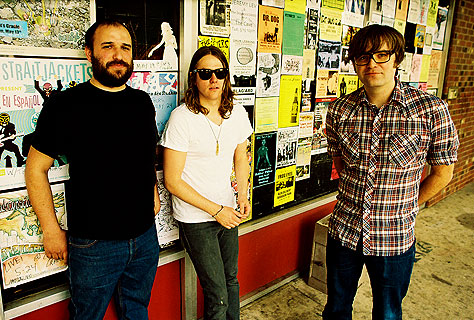 David Bazan is endlessly fascinating. Known primarily for his work with Pedro the Lion, he has spent decades on the Christian rock circuit questioning the religion’s basic tenants. The fantastic Body Piercing Saved My Life: Inside the Phenomenon of Christian Rock aptly describes him as “leading his listeners out of the desert of certainty, preaching the gospel of doubt.” He won’t play most Christian music festivals and most Christian music festivals wouldn’t have him anyway.

A few months ago Ben Gibbard of Death Cab for Cutie fame performed Pedro the Lion’s first single “Big Trucks” at a Stereogum SXSW event. After all this waiting though, a video just surfaced. It’s a close-up pro-grade recording (shot for Stereogum I’m guessing, though they never posted it) that looks good and sounds better. Nice of Gibbard to shout out a fellow Seattleite, who actually opened for Death Cab on tour in 2007 (that’s Bazan on the left in the photo above, Gibbard on the right).

“Big Trucks” is less religion-focused than much of Bazan’s work, describing an interesting back and forth between a father and son. The son discovers his dad’s vulnerability after an emasculating encounter while the father tries to turn the experience into a lesson on nonviolence. As he so often does, Bazan uses just a few details to paint a broad picture.