Shuffle Sundays is a weekly feature in which we feature a cover chosen at random. The songs will usually be good, occasionally be bad, always be interesting. All downloads will only be available for one week, so get them while you can. 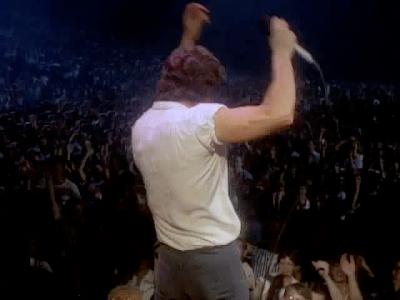 A while ago a friend of mine got into an argument with her family about whether Manfred Mann wrote “Blinded by the Light.” It seemed inconceivable that someone would not know this was a Bruce Springsteen song and, subsequently, might think the line was actually supposed to be “revved up like a douche” (Bruce sang “deuce,” but Mr. Mann enjoys the potty humor).

To be fair though, I thought for years that “The Mighty Quinn” was an original. Mann has made hits out of many such lesser-known songs. If people think they’re written by him because of it, that’s not strictly his fault.

Unlike with “Blinded,” I think Springsteen’s contribution to “Dancing in the Dark” is safe. It helped Born in the U.S.A. move thirty million copies worldwide and spawned an incredibly cheesy video featuring a sleeveless tee and a pre-fame Courtney Cox. It’s spawned countless parodies, from Jon Stewart…


…to the Muppets (love Kermit’s mid-life crisis joke!)
Manfred Mann never recorded an album version of this song, but he has covered it live with his Earth Band for almost a decade now. By itself that would probably sound pretty good, but he inexplicably mashes it up with the Animals’ version of “House of the Rising Sun.” One song is about feeling bored with one’s life, the other concerns spending all your money on prostitutes. Perhaps not the most logical songs to put together.