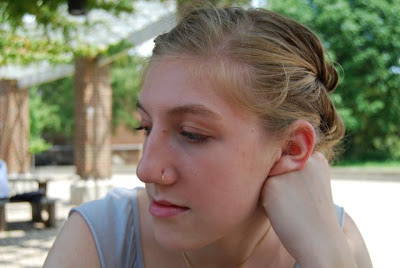 Our 2010 Cover Commissions season kicks off with an up-and-coming songwriter straight out of the heartland. Bloomington, Indiana that is, home to John Mellencamp, David Lee Roth…and Kristy Brannon.

Not that Kristy sounds much like the local rock stars. Her quiet confessions come instead from the female songwriting tradition of Norah Jones or Sara Bareilles, proving once again that with smart lyrics and a pretty voice it doesn’t take more than an acoustic guitar to make a point. She describes herself as an “indie folk female version of Bright Eyes” and she’s not far off.

You can check out more info on Kristy from her website or MySpace page. Personally, I recommend hitting the website, if only to check out her blog which features endearingly meandering thoughts on everything from Space Ghost to dreams about marriage proposals from aliens. There you can also download Kristy’s latest EP, The Untold Story, for free after checking out the sample below.

Kristy makes her cover debut here on Commissions, selecting ten songs that range from pop-punk rockers to alt-country crooners. Which one will she cover? It’s up to you!

The choices are listed below, each linked to a YouTube video. Listen to the songs, listen to Brannon’s original material, then pick which song she should cover in the poll on the right.