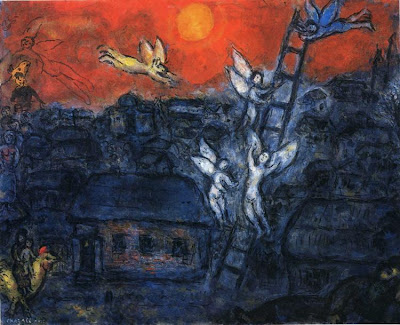 When Bruce Springsteen announced in 2006 he was releasing an album of Pete Seeger songs, fans were perplexed. First of all, Pete Seeger wrote a grand total of zero of the disc’s songs, so why give him all the credit on We Shall Overcome: The Seeger Sessions? Plus, a full album of traditional songs about mule-driving and froggie-courting seemed like a questionable career move.

Upon the album’s release though, many previous skeptical fans suddenly got it. These weren’t über-sincere acoustic guitar folk songs; this was his best loudest party album since this first disc of The River. Horns blared, accordions wailed, background singers yelped…there was even a washboard.

A high point of the disc was a take on the traditional “Jacob’s Ladder” that shook the heavens. Music journalist Dave Marsh described the tune in his liner notes (available online):

A Negro spiritual based on Genesis 28:11-19, best known as a Sunday School tune. It refers to the prophetic dream given to Jacob at Beth-El, while he is fleeing his brother, Esau, whom Jacob has cheated out of his inheritance. In the dream, angels are ascending and descending a ladder to heaven. While they do this, God promises Jacob that his seed “shall be as the dust of the earth” and spread throughout the world.

Slaves related to the dream powerfully, because it ended with a covenant that promised liberation: “I will not leave thee, until I have done that which I have spoken to thee of.” (This is consistent with the Midrash interpretation of the steps of the ladder as the exiles that the Jews would suffer.)

“Jacob’s Ladder” is another song that is much more commonly sung than recorded. Arlo Guthrie, Jane Siberry and Greg Brown made contemporary versions. There are vintage roots recordings by, among others, Hylo Brown, E.C. Ball, and Paul Robeson and gospel renditions by the Staple Singers, Bernice Johnson Reagon, Doris Troy and the Clara Ward Singers. Pete Seeger’s version can be found on Singalong: Live at the Sanders Theater, Cambridge, Massachusetts, 1980.

If that all sounds a bit solemn, watch this video of the band doing it at St. Luke’s Cathedral for the BBC (also worth watching: this promo vid).

That came from May of 2006. By the fall this song (and every other) had gotten even more riotous, with more solo, more hollering, and even more joy. The tremendous Live In Dublin CD/DVD chronicles that period, the band hitting their peak as the tour rolled to a close. This rendition of “Jacob’s Ladder” comes from there.