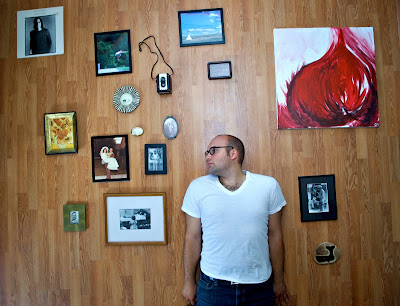 The sound Minnesota’s Peter Miller creates as We Are the Willows isn’t easy to describe. Here’s how other people have tried: “He holds your hand through the maze of contradictions like a tour guide brimming with whatever he calls ‘soul,” writes one site. “If Schroeder from Peanuts grew up listening to Elliott Smith, it’d sound something like this,” says another. Perhaps the most telling description comes from this University of Wisconsin student breaking into tears watching Miller perform.

Indeed, it’s hard to listen to the haunting melodies of We Are the Willows without being moved. Like an earthier Sigur Rós, Miller conjures grand soundscapes to envelop his curious and questioning lyrics. To record his just-released album A Collection of Sounds and Something Like the Plague he roamed all over Minnesota with a laptop microphone capturing the sounds around him. Those are real birds chirping you’ll hear, and a real train rushing by.

“I tried to reinvent all these things in my surroundings to make them into something different,” Miller told Minneapolis’ City Pages. “A train going by doesn’t mean anything more than a train going by. But the song it’s in, it can be something completely different than what it is. It can be reinvented. So all these sounds, they become something else.”

This sonic map soon became an actual map, depicting Minnesota with the typical “water, bridge, tunnel” landmarks replaced by “died a little bit on the inside” and “nick and i practice karate.” Here it is in miniature (click on the image for a larger version). 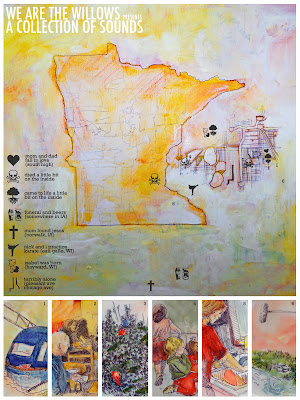 Originally a side project from Miller’s popular indie quartet Red Fox Grey Fox, We Are the Willows has taken on a life of its own as bloggers everywhere discover the haunting beauty laced through Miller’s songs. Check out this video of him performing for Minneapolis’ The Current last month.


You’re ahead of the game after watching that. Now you can avoid the oft-made mistake of thinking that bell-clear tenor comes from, well, a girl. No, that’s really him. Here are a couple more samples, from his pay-what-you-want A Family. A Tree. EP.

Now that tender tenor comes to Cover Me for December’s Cover Commissions. You know the drill, but here’s a refresher. Below are eleven songs, each linked to a YouTube video. Listen to each song, listen to Miller’s original material, then pick which song he should cover in the poll on the right. You’re dealing with one hell of a voice, so choose carefully!