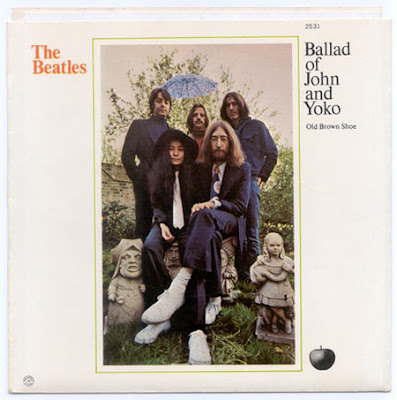 George Harrison wrote “Old Brown Shoe” as the b-side to “The Ballad of John and Yoko” single. Its inclusion seems only fair, after all, since John Lennon and Paul McCartney recorded the a-side while Harrison was on vacation.

“I started the chord sequences on the piano, which I don’t really play, and then began writing ideas for the words from various opposites: I want a love that’s right, But right is only half of what’s wrong,” Harrison said. “Again, it’s the duality of things — yes-no, up-down, left-right, right-wrong, etc.”

The tune is their Beatles at their bluesiest, complete with a fuzz-rock guitar solo from Harrison (Lennon’s guitar part was replaced by George’s organ in the final recording). Here’s a proto-music video for the track with studio footage:


In his solo career Harrison performed the song live over the years (watch him play it in ’91 with Eric Clapton here). It was resurrected in 2002 a year after his death in the Concert for George by Gary Brooker, who had played piano on several of Harrison’s solo albums.

On the Songs from the Material World Harrison tribute album though, Mountain guitarist Leslie West gives “Old Brown Shoe” a swamp-blues treatment equal parts Creedence and Skynyrd. His gruff vocal delivery propels the song along, but it’s his trademark searing solos that show why Johnny Ramone named him as a favorite.

“Leslie West [of Mountain] never gets any recognition,” Ramone told Rolling Stone. “I’ve always been a big fan of his, since back when he was a fat kid dropping out of high school in Forest Hills [Queens]. He was, to me, one of the top five guitar players of his era. His playing is so soulful and tasteful.”