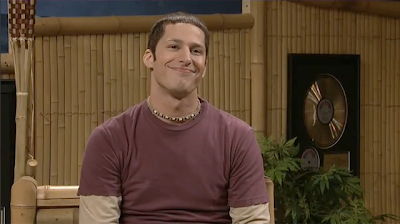 Say what you will about Jack Johnson, but not many artists have two White Stripes covers under their belt. This beach bum went on a Jack & Meg kick in ’05-‘06 though, recording one cover for a soundtrack and jamming a second live.

For 2006’s Curious George soundtrack Johnson took on the elementary-school classic “We Are Be Friends.” It’s Conan O’Brien’s favorite Stripes tune (he brought them in to sing it his last night on Conan last February) and does seem more appropriate for a kiddie movie than anything with lines like “I’m gonna fight ‘em off / A seven nation army couldn’t hold me back.” “Friends” helped drive the disc to #1, making it the first soundtrack to an animated film to hit that spot since Pocahontas in ’95.

Johnson fans couldn’t have been surprised to learn their man was a Stripes fan though. After all, he’d been playing “My Doorbell” live since the previous September, the same month the Stripes released it as a single promoting their underrated Get Behind Me Satan. Here’s Jack and Meg White performing it on The Daily Show with Jon Stewart (the show’s first musical performance) in December. They also performed “The Denial Twist,” which you can watch here.

That was thankfully before 2007, when White began performing it on bass. Yes, bass. There’s a recording of that here, but beware. As I wrote in a review at the time, “This may be one of the most drastic reinventions they’ve ever done, from catchy little piano ditty to distorted bass screecher (the first time Jack’s even played the instrument no less) and the general consensus is correct…it sucks.”

Johnson graciously left the bass at home when he busted this “My Doorbell” cover out Feb 20, 2006 a few weeks after the Curious George soundtrack came out for the BBC’s “Live Lounge” program. Tapping on his acoustic guitar while Zach Gill of Animal Liberation Orchestra (I believe) plays the piano and provides backup vocals, it sounds exactly like you would expect. This is a good thing: Johnson is more than qualified to pull off the poppy side of Jack White.